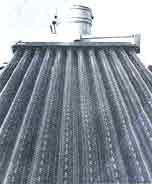 To boost the stagnant demand for solar heating devices, the Union ministry of nonconventional energy sources (MNES), along with the ministry for urban development, has chalked out a scheme to make the installation of solar and air heaters mandatory for all government buildings. This was announced in the beginning of August by minister of state for nonconventional energy sources S Krishna Kumar, at a meeting with manufacturers of solar devices. He informed them state governments would be also asked to initiate similar schemes.

Kumar added that the Centre had decided to introduce a soft-loan facility to encourage the utilisation of solar thermal devices. The loans would be made available through the Indian Renewable Development Agency, the financing arm of the MNES.

Manufacturers of solar devices have greeted the announcement with circumspection. Says R L Anand, acting president of the Nonconventional Energy Devices Manufacturers' Association, "Government assistance is necessary if our industry is to survive. We are still at a disadvantage compared to the electrical sector, whose competitiveness is based on low power tariffs and economies of scale."