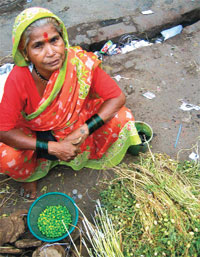 DROUGHT is the worst enemy of crops like chickpea which requires moderate rainfall for growth. Studies till date have focused on how dehydration changes expression of genes that code for proteins vital for the plant’s survival. But there is a dearth of studies that look at the activity of proteins during dehydration.

A team from the National Institute of Plant Genome Research in New Delhi has identified proteins that fight dehydration in chickpea. Researchers compared two varieties of chickpea—dehydration-tolerant and dehydration-sensitive. Seedlings of both varieties were dehydrated for 192 hours followed by rehydration and recovery for 24 hours; tissues collected every 24 hours during dehydration; cell wall from tissues isolated and purified; proteins extracted from the cell wall and analysed.

The cell wall of any plant bears the brunt of dehydration. They observed the number of proteins that play roles in metabolism, synthesis of the cell wall components and cell defense was higher in the dehydration-tolerant variety. During dehydration, levels of cell-damaging reactive oxygen species (ROS) like superoxide increased. There was a two-fold rise in the activity of enzymes that counter ROS in the dehydration-tolerant variety. So they could identify proteins that confer dehydration tolerance. Ge-nes responsible for these proteins could be manipulated for developing transgenic crops, says Niranjan Chakra-borty, co-author. The study was published in the April 1 issue of Journal of Proteome Research.