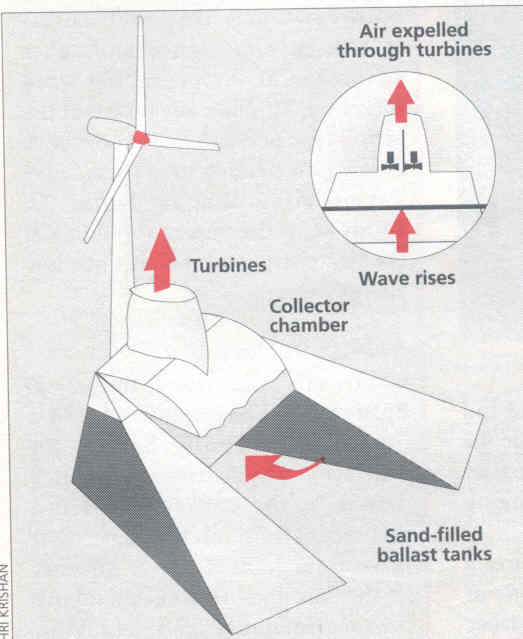 EXACTLY 16 months after the UK government stopped aiding research into wave power on the grounds that it had no commercial future, the world's first wave-powered electricity generator has been launched off the shore of Scotland.

Promising mass production of power at a wondrously cheap rate, the new electricity generator named Osprey, is designed to exploit both wind and wave energy at the same time (New Scientist, Vol 147, No 1988).

Its radical design involves a huge steel structure that can produce 2 mw of electricity from big surf waves and another 1.5 mw from a wind turbine positioned on top of it.

The sea off the coast of Scotland is legendary in its ferocity. In view of the violent waves which could make a mess of machinery, the generator has an advantage over its prototypes: it has only one moving part, the turbine, and this is protected both against salt and the power of the waves. Past experience had it that machines with too many moving parts were often battered into submission.

A wind turbine was added to the Osprey design much after the initial blue- print had been drawn up when engineers found that the wind off the sea had much greater velocity and power than' inland wind. Implanted in the sea bed about 350 metres from shore, this 20 in tall pilot plant sits in 14 in of water.

As the waves rise and fall in the machine's chamber, forcing air out and in through the turbines, electricity is generated and is transmitted to a grid via a submarine cable. However, the flow of the electricity from the plant will be intermittent as in other renewable energy sources, and in July when the sea is comparatively calm the generator may not produce any power at all.

It has been estimated that over the years the machine will produce energy equivalent to a 600 - kilowatt generator. In addition, the engineers are optimistic that the machine could be scaled up to generate 8 megawatts. Moreover, Osprey is believed to be cost-effective as it will produce power for 6 pence per kilowatt-hour "that will eventually come down to 4 pence," says Allan Thomson of Applied Research and Technology, the Inverness Company that developed the Osprey.

Initially aimed to power desalination plants, Osprey could also supply electricity to isolated areas and islands that have no access to cheap power. With f,4 million gone into its development, funded by the European Union and a consortium of 6 British and French Companies, Ospreys success in providing renewable energy on a large scale, is likely to herald a new era in wave power research.

So While the generator was towed to the north of Scotland, dropped onto the seabed and plugged into the grid at Dounreay, Thomson emphatically declared, "I would like to think that we h4ve done enough to convince the (13,ritisb) government to think again and givle the wave industry the support it deserves."