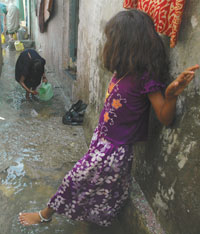 MALARIA incidence has more than trebled in Mumbai this year even as the civic authorities launched a special drive to control it.

Twenty-one persons died and 34,712 contracted malaria since April this year.

This is 47 per cent of the total registered malaria cases in Maharashtra, Suresh Shetty, health minister, informed the Maharashtra Assembly on July 15. The corresponding figure for last year was 6,336. "We have asked for a technical team from the Centre to help fight malaria," Shetty added. "In June, over 2,500 patients were admitted. Over 92 per cent of them were suffering from vivax malaria, considered benign compared to falciparum malaria," said Girish Ambe, executive health officer of Municipal Corporation of Greater Mumbai (MCGM) (See 'Malaria decoded').

Doctors warned the increase in number of malaria cases is not the only concern. Vivax malaria has undergone a change.

"Patients suffering from vivax malaria are showing complications that were earlier linked only to falciparum malaria," said G S Sainani, consultant physician at Jaslok hospital. He said almost 60 per cent of the patients he sees in a day are suffering from malaria and 10 to 12 of them need hospital care.

Other city doctors have reported a similar trend. At Hinduja Hospital, doctors have been observing a change in vivax malaria for the past two to three years. Some patients also develop multiple- organ failure and lung injury.

Recently, two patients with paralysis were admitted at the government-run KEM Hospital. Doctors found that vivax malaria had paralysed their limbs. Low platelet count, which was associated with falciparum malaria, is now common in patients with vivax malaria. Patients are also suffering kidney failure and heart attack.

"The change could be due to resistance to drugs. But studies are needed," said Siddhartha Dalvi, a microbiologist in Pune. T Adak, deputy director of the National Institute of Malaria Research (NIMR) in Delhi, said there is not enough evidence to show the vivax strain is mutating. "This may be a mutation, but tests are needed," he said. NIMR is yet to initiate research in this direction. Doctors in Mumbai report another alarming trend; this year several patients have been found with both vivax and falciparum strains. This is unusual and makes treatment difficult. In addition, falciparum malaria is also common.

D S Dakure, Maharashtra's director general of health services, said the focus at present is on controlling the malaria vector. The municipality said it is trying its best to control mosquito breeding and the spread of the parasite that causes malaria. MCGM said it has zeroed in on seven municipal wards where it found high incidence of malaria.

The corporation claimed the surge in malaria is mostly due to poor maintenance. "Several large properties belong to the corporation, railways, the Port Trust and other government agencies. Their tanks are mostly left uncovered and water is allowed to stagnate," said Ambe, MCGM's executive health officer. Stagnant water in slums is also responsible for the disease spread, Ambe said.