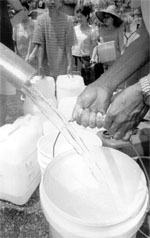 About two million people would be extended water rationing till September amidst depleting dam levels. Mohammed Shariff Jajang, chairperson of the Selangor state information committee, says that production at the main Langat and Semenyih dams is presently maintained at about 70 per cent of the normal level. "The current rationing period is based on this production level but if the water levels at the two dams continue to drop, production will be affected," he says.

If that happens, it will mean stricter rationing and a longer rationing period," he says, adding that rationing which began in March would go on at least till September when the next rainy season is expected. A meteorological department officer has warned of more dry days next month when the south-west monsoon season sets in.

Selangor and at least six other states have been hit by water shortages due to the severe drought, which has in turn sparked a rash of peat fires leading to a haze in different parts of the country. Kuala Lumpur is especially concerned about the problems of water shortages and haze as it will host the Commonwealth Games in September.