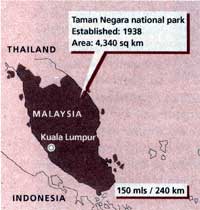 Development and environment are at loggerheads in the Taman Negara national park situated near Kuala Lumpur. The park shelters one of the world's oldest rainforests, described as the 'jewel in the crown' of Malaysia's natural heritage. Pressure is mounting from developers to build a road and airstrip to provide better transport links for the public visiting the park, which is a rich storehouse of flora and fauna and one of the world's most precious ecosystems. The 4,34,000-ha park is a protected area of ancient natural forests that stretch half-way down the Malaysian peninsula from the Thai border. The park is also home to up to 350 of the world's rarest songbird species, besides elephants, tigers and tapirs. But over the years, it has turned into a refuge for sandalwood smugglers, insurgents, illegal immigrants and rhinoceros poachers. It has also evolved into a big tourist spot, attracting hoteliers, travel firms and developers. Park superintendent Ramlah Abdul Majid says, "As far as conservation is concerned, it is now or never."