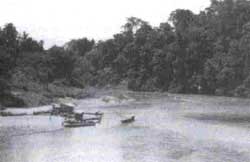 THE department of wildlife and national parks (DWNP) or Perhilitan in Malaysia is a separate entity from the forest department, falling under the country's ministry of science, technology and the environment and functioning independently. Structured into eight working areas, one of which is devoted to Taman Negara alone, spread over 4343 sq km -the largest of the 13 national parks - Malaysia's wildlife department has two branches. These are wildlife research/ conservation and the other is 'ecotourism'.

The database/GIS (geographical information system) unit of the Wildlife Research division analyses data from a recently introduced Gis Arc-Info mapping system to produce digitised maps on wildlife distribution in the various states. A digitised map of Taman Negara national park is now being used in satellite telemetry to plot the movement of Mek Penawar, Asia's first elephant to be equipped with an Argos satellite transmitter and translocated in October 1995 into this park from Johore in southern peninsular Malaysia.

Previous ground tracking telemetry proved unsuccessful due to the inaccessible undergrowth of this 130 million-year old rain forest which rendered it impossible to receive transmitter signals. The new transmitter that Mek Penawar wears, is a white box attached to a collar of heavy machine belting around her neck, beaming signals to satellites over the Malaysian airspace which are then relayed to ground control for analyses.

Translocation is expensive. The DWNP uses us $6,000 for capturing and transporting - costs while Michael Stuewe, principal investigator for the Smithsonian Institute estimates the scientific study of one elephant to cost us $14,000, of which the transmitter costs us $8000. Stuewe plans eight more translocations at an estimated total us $10,000 per elephant.

Further data will help evaluate habitats, behaviour and home ranges of translocated elephants vis-a-vis the area's carrying capacity. The department facilitates studies of otters, birds and insects with their officers keeping abreast of developments by attending international meetings and courses.

Ex situ captive breeding of Malaysia's most poached and endangered animals are underway in one-acre enclosures in the Krau wildlife reserve in Pahang state. Perhilitan's ecotourism has a policy of local induction for local administration. Taman Negara's 93-member DWNP body consists of three 'outsider' transferable officers and 90 local staff, trained to be inducted into all departments.

Although long-term planning is needed for careful control of the park, Taman Negara's local involvement throws up a simple answer to heavyweight terms like participatory microplanning process and protected area mutual interaction assessment - passwords of the World Bank.