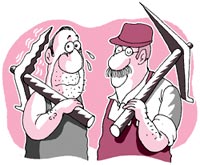 due to the rampant use of herbicides, men in rural areas have lower sperm counts than their urban peers. This is the finding of a recent follow-up study conducted by a researcher from the University of Missouri-Columbia, usa. Shanna Swan, a professor of family and community medicine, had announced in November 2002 that fertile men in rural areas of the us have lower sperm counts and less vigorous semen than men in urban areas.

Through her recent study, Swan has linked the problem with three chemicals -- alachlor, diazinon and atrazine -- that are commonly used in the us. Swan studied two groups: men residing in mid-Missouri (a rural area) and those living in Minneapolis (an urban centre).

The researcher tested urine samples of both the groups for 15 currently used pesticides. Samples of mid-Missouri men, who had poor semen quality, contained significantly higher concentrations of the herbicides than samples of males with better sperm count. Swan found no correlation between semen quality and pesticides such as deet, which are primarily used for domestic purposes across the country.

"This is the first research that shows a link between elevated levels of these pesticides in the human body and potential reproductive problems," Swan claims. "Since the subjects included a cross-section of men in mid-Missouri, rather than mostly farmers, the findings reflect the effects of the chemicals on the entire population."

"It is likely that men are ingesting these chemicals through their drinking water," Swan asserts. As per the findings of a survey conducted by the us Geological Survey in 1995, the herbicides were found in groundwater supplies of rural areas at concentrations exceeding federal reporting levels. In addition, the agency admitted that conventional water treatment method is ineffective to filter out alachlor and atrazine from drinking water.

Swan asserts that researchers should examine the water sources and seek better methods to remove the pesticides. They should also promote safe alternatives to the herbicides on a large scale. Studies examining the impact of the chemicals on the health of women and children should also be conducted.