Research finally establishes that smoking and lung cancer are directly proportional to each other. Tobacco firms are hopping mad 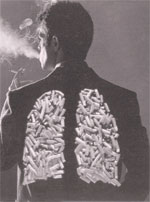 after three decades of painstaking research, a team of American researchers has at last been able to establish a direct link between smoking and lung cancer. Mikhail F Denissenko, Annie Pao, Moon-shong Tang and Gerd P Pfeifer have reported in Science (Vol 274, No 5286) the first direct evidence showing that a chemical found in cigarette smoking causes genetic damage in lung cells that is identical to many malignant tumours of the lung. The finding is significant as it could topple more than three decades of denials by tobacco companies and provide plaintiffs with the 'smoking gun' they have long sought.

"Our study thus provides a direct link between a defined cigarette-smoke carcinogen and human cancer mutations," write biochemist Moon-shong Tang and colleagues at the M D Anderson Cancer Centre in Houston, us. The Houston experiments were repeated and confirmed by Gerd P Pfeifer and his team at the City Hospital in Duarte, California.

Researchers and public health experts have been arguing for over 30 years, based on conventional epidemiological studies using statistical analysis of data collected, that smoking causes lung cancer. According to data collected by the National Cancer Registry of the Indian Council of Medical Research, New Delhi, the incidence rate of lung cancer for men is 6.5 per 100,000 and there are over 200 million smokers in India. As many as 31,000 new cases will be added in the coming year. In the us, lung cancer accounts for over 140,000 of the more than 400,000 smoking related deaths each year. But cigarette manufacturers have taken the stance that while smoking may be a risk factor for cancer, there is no conclusive evidence that it is a direct cause.

Now these two teams of scientists show precisely how, at the molecular (genetic) level, a chemical, benzo(a)pyrene epoxide, in cigarette smoke can damage the p53 gene that otherwise prevents cell growth from going haywire -- a hallmark of cancer. Among the many components of cigarette smoke, polycyclic aromatic hydrocarbons are strongly implicated as causative agents in the development of lung cancer. Benzo(a)pyrene, which occurs in amounts of 20 to 40 nanogram per cigarette is by far the best studied of these compounds and is one of the most potent mutagens and carcinogens known. This compound requires metabolic activation to become the ultimate carcinogen metabolite -- benzo(a)pyrene diol epoxide (bpde), which binds to dna and causes the p53 gene to mutate. Denissenko et al were able to prove that the bpde-induced mutations occur at the same spots that develop lung cancer and thus are involved in causing carcinogenic transformation of human lung tissue .

The p53 gene normally holds the reproduction of lung cells in check, and as long as it is functioning normally, the cells cannot indulge in malignancy or uncontrolled growth. Damage to the gene (which bpde can cause), however, releases the cells' emergency brake making them malignant.

Researchers have since found damaged versions of p53 in many cancers. In their report, Tang and his colleagues note that "...about 60 per cent of all human cancers contain mutation in the p53 tumour suppressor gene." Moreover, they have found that most of the mutations seen in lung cancers occur in three specific 'hotspots' on the gene, and one spot in particular is specific to lung cancer.

"The coincidence of mutational hotspots and adduct (gene complexes) hotspots suggests that benzo(a)pyrene metabolites or structurally related compounds are involved in transformation of human lung tissue," wrote the researchers.

The anti-tobacco activists are understandably elated. The more definitive link between benzo(a)pyrene and the p53 gene "will demonstrate to jurors that there is no doubt at all that cigarette smoking promotes cancer at the cellular level", said Kenneth B McClan, a Missouri-based lawyer who has represented plaintiffs in cases against tobacco companies.

Tobacco companies, meanwhile, are trying hard to find chinks in the study. Even though the specific biological mechanisms by which cigarette smoking causes lung cancer has been shown in the Science study, the industry does not seem to be impressed. A spokesperson of Philip Morris, the cigarette giant, called the research "extremely interesting" which needed careful review.