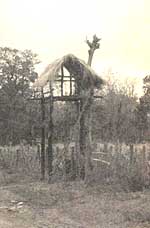 ELEPHANTS are fast becoming a law and order problem in some parts of the country. A herd of elephants crossed over from Bihar into the tribal district of Sarguja in MP, attacking villages and fields. In the last few years, officials say 14 people have been killed but tribals say 50 of their relatives have died. After the recent rampage, angry tribals cut down trees to block the road; officials appealed for help from their counterparts in Karnataka and Assam well-versed with the elephant menace; high-voltage wire fencing was installed; armed guards started patrolling the area; and the state government 'complained' to the authorities in Bihar, urging them to keep the animals within its own boundaries. A few years ago when the state had appealed to the Centre, it had been promised help but was told categorically that not a single animal should be killed.

Similarly, in Darrang district of Assam, elephants have claimed several lives and in Tripura, last month a farmer was killed by marauding wild elephants. In West Bengal, the government has already got Rs 10 lakh from the Centre to set up an elephant sanctuary and is asking for an additional Rs 44 lakh. The people in the elephant-infested districts of Bankura, Purulia and Midnapore, continue to face repeated attacks. Clearly, given the size of the problem, the government needs a well thought out strategy to protect both humans and elephants.