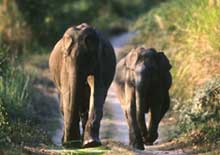 populations of the Asian elephant (Elephas maximus) across India do not belong to one family, according to T N C Vidya and R Sukumar of the Centre for Ecological Sciences, Indian Institute of Science (iisc), Bangalore. The pachyderm population has undergone considerable genetic separation in two particular pockets, due to geographical and ecological segregation over time, the scientists say on the basis of a genetic study they conducted.

They had earlier shown that the elephant population in the country formed four distinct sets -- those found in north-northeast India, in central India, Nilgiris in south India and Anamalai-Periyar region, also in south India.

The new evidence bolsters the argument by showing that in south India the Palaghat gap in the Western Ghats -- the only gap in the entire range -- has kept the elephant populations segregated, leading to genetic differentiation over time. Similarly, in the Northeast, the Brahmaputra basin has acted like a bio-geographic barrier to generate a different genealogy.

While it may have little implication for the north and northeast elephant populations, the study raises pertinent questions for the southern populations. There has been a vociferous demand to translocate male elephants from the Nilgiris to the southern Periyar area where poaching has skewed the male to female ratio from 1:4 to an abysmally low 1:100, threatening the southern population with genetic collapse and ultimately, local extinction. But such a measure may not be the right move, the study suggests. It is widely believed that translocation of wild animal species from a region where they have a different genetic makeup can reduce the ability of the receiving population to adapt to its surroundings. It can, according to earlier studies, also preclude the evolution of new species.

The iisc study raises the level of debate from a simple case of translocating elephants to bolster dwindling populations. It stresses the need for scientists and conservationists to first consider possible impacts of bringing together divergent populations of the same wild species parted into two separate geographic regions.