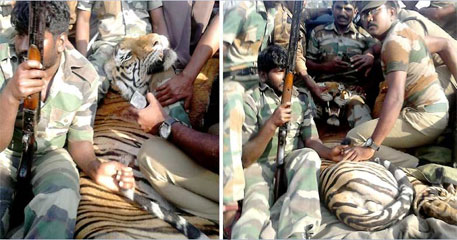 The “man-eater” tiger that killed a farmer in Kerala and a woman tea estate worker in Tamil Nadu last week was shot dead by the Special Task Force (STF) of Tamil Nadu forest department at Susampadi forest area in the Nilgiris district. It was killed after a five-day joint search operation mounted by both the states.

The big cat on the prowl was spotted inside a private tea estate near Mukkatti by the estate workers Wednesday afternoon. They alerted the forest officials. The forest officials and the special task force members rushed to the spot. “Efforts to tranquillize the wild animal by the STF failed, and hence it had to be shot dead. It was trying to attack the STF personnel,” said district collector P Shankar.

On February 14, the tiger had killed a woman named K Mahalakshmi in Pattavayal. On the same day, it had also attacked a man, Ratish. On February 10, a farmer, K Bhaskaran, was also killed by the same tiger, it is reported.  The following day, an angry mob of local people torched a few vehicles of the forest department in the area and demanded the killing of the animal. Both Tamil Nadu and Kerala governments were forced to issue orders to kill the tiger.

About 120 personnel of five teams, including STF, Armed Reserve Force and forest officials were engaged in the combing operation but the tiger managed to give them the slip for five days.

Farmers living in the villages along the Tamil Nadu-Kerala border heaved a sigh of relief after the tiger shot dead. “It has been giving us sleepless nights for the past few days. Nobody dared to step out. Schools remained closed for three days,” says R Sukumaran, a resident of Kolly village near Pattavayal where Mahalakshmi was killed.