Mangalyaan is now in orbit of Mars

ISRO spacecraft joins three other orbiters of European Space Agency and NASA; ISRO scientists eagerly await information on the levels of methane in the planet’s atmosphere 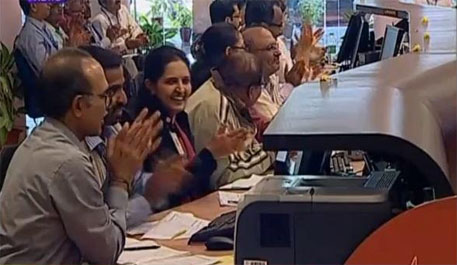 The Mangalyan is now in the orbit of the planet Mars. All manoeuvres went smoothly. India is now the fourth country to have achieved this. India managed to achieve this successfully in the first go. At present, three orbiters—one from the European Space Agency (ESA) and two from NASA—are monitoring Mars. The Mangalyaan is in the Mars orbit four decades after Mariner 9, a NASA orbiter, became the first spacecraft to enter the planet’s orbit on November 14, 1971. Success rate of missions to the planet has been poor. About two-thirds of the missions have failed.

Prime Minister Narendra Modi who attended the event informed the nation of the success and congratulated the scientists of ISRO.  Mangalyaan was sanctioned in March 2012 and was announced on the Independence Day that year by the then Prime Minister Manmohan Singh. General elections were round the corner and critics wrote off the mission as an effort to give people a reason to cheer.

On November 5, the rocket PSLV-C25 successfully carried the orbiter to Earth’s orbit and released it. The orbiter continued to move in the Earth’s orbit for the next 25 days, gaining velocity with each of the five revolutions. In December, it was released into the space. Its 300 day space journey began. ISRO touched base with the orbiter again on September 22 to ensure that the engines could be fired to insert it in the planet's orbit.

Now that the orbiter is in the planet’s orbit, the five instruments on board will become crucial. Signals sent from the orbiter to Earth would take around 20 minutes to reach but would bring in valuable information about the planet. Most awaited is the information on the levels of methane in the planet’s atmosphere. This is the first time that methane in the atmosphere of the planet will be measured by a satellite. The orbiter would be monitored for the next six to 10 months and at least one terabyte of data is likely to be received from Mangalyaan. The technical capacity enhanced during this would help India improve space applications and improve the autonomy of satellites.

Mars missions have yielded tangible results for advancing our knowledge of the planet. Knowing Mars can provide an understanding of Earth’s future. Unravelling the planet’s atmospheric loss would enable scientists to better understand how Mars transformed from a once water-rich planet to today’s drier, colder and less hospitable world.