Mangroves on public land in Maharashtra will be reserved forests

Officials justify the move saying high court order of 2005 has done little to stop destruction of mangroves; but conservationists are critical 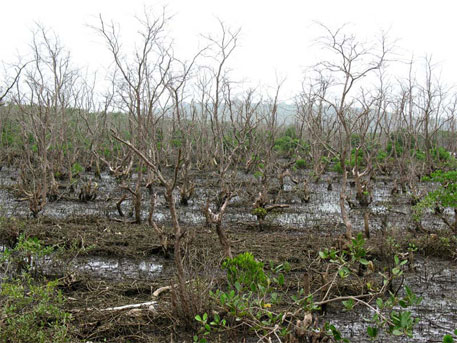 Maharashtra recently issued a resolution which paves the way for classification of all mangrove forests on government land in the state as “reserved forests”. Officials say the move follows the urgent necessity to improve protection of mangroves since they act as buffers during natural disasters such as tsunamis and cyclones; cities like Mumbai are vulnerable to such disasters, according to a recent World Bank report.

While the government officials claim this is a positive step, independent campaigners working for the conservation of mangroves and in community-based forest governance, suspect the forest department merely wants to increase its control over mangrove forests, not seriously protect them.

Principal secretary (forests), Praveen Pardeshi, said the change in classification from “protected forests” to “reserve forests” will help in enhancing protection to the mangroves as entry, and human interference in general, will be restricted. Also, he claimed, “they were protected only by court orders till now but, after a change in classification, mangroves will be protected much more since the Forest Conservation Act, 1980, will be applicable to them,”

Through an order delivered in October 2005, the Mumbai High Court has given the status of “protected forests” to mangrove areas  on government land and that of “forests” for mangrove land under private ownership in the state. It has prohibited damage to them in any form. However, officials say, there was a felt need to extend more legal protection to mangrove forests as the destruction of mangroves has not stopped despite the order.

“There was a feeling that additional protection is required. Providing the status of 'reserved forests' to mangroves will help in further enhancing protection. Unlike in the case of 'protected forests' where some activity is permissible, in 'reserved forests' all activities will be completely prohibited,” said N Vasudevan, chief conservator of forests (mangroves). “Secondly, recording and settlement of rights of existing local communities will be done as mandated in Section 4 of the Indian Forests Act, 1927. The problem with the classification of 'protected forests is that rights can continue to accumulate,” explained Vasudevan.

Campaigners and conservationists are critical of these official claims. They alleged that the government resolution (GR) will not help conserve, protect or better manage mangroves but only serve to strengthen the control over these forests of the department. It excludes private lands on which mangrove forests exist and ignores the existing provision in CRZ notification. This is a top-down approach which has failed across the country as local communities rarely see their rights settled, they said.

“It is completely misleading to say that there was no legal provision except court rulings for protecting mangroves. The Coastal Regulation Zone notifications of the environment ministry provide for the protection of mangroves. They should have asked for designating forest department as the one responsible for protection under the notification instead of changing the classification. This shows that the forest department simply wants to increase its control. I am going to challenge this GR in court,” said D Stalin, project director of non-profit Vanashakti.

Convenor of the Conservation Action Trust, Debi Goenka, who fought the 2005 case in the high court, said, “We have been asking for the classification of mangrove forests as “reserved forests” since 2005. It should have happened long ago. In any case, it (the GR) has left out mangrove forests on private lands, which are also crucial. For instance, in the case of the Navi Mumbai airport, the fact that there were large parcels of mangrove forests on private land  was hidden when the proposal for environment clearance was sent to the MoEF. Do they not require protection?”

Member of the Mangrove Society of India (Mumbai Chapter) Rishi Aggarwal, cautioned: “The ramifications of classifying mangrove forests as reserved forests is yet to be studied. It is likely that situations of conflict which pit people against environment norms arise as local communities will bear the brunt.” CCF (Mangroves), Vasudevan, denied this will be the case. “According to the Indian Forest Act, 1927, a revenue officer will be appointed as a forest settlement officer to record and settle claims over rights of local communities. This process starts after notification under Section 4 of the Act,” he said.

However, veteran ecological expert Madhav Gadgil, who has a long experience in working on community-based forest governance, is not convinced and doubts the forest department's motive.

“With such a corrupt system, you cannot expect a top-down approach for rights settlement to succeed. Why is the forest secretary going for an old British-era legislation to conserve mangroves? It has a poor record of recognising the traditional rights of local communities. The Biological Diversity Act enacted in 2002 is your best tool for saving mangroves. For, it adopts a democratic approach towards conservation. You have to set up Biodiversity Management Committees at the level of the local public bodies so that people manage their own resources by documenting and deciding their use. The forest secretary should know, he is after all a member of the state biodiversity board,” said Gadgil.