The concept of Virtual Reality -- simulating the real world -- is adding a new dimension to entertainment and education. 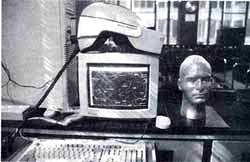 LEWIS Carroll would have been delighted to put Alice into this wonderland. And James Thurber's Walter Mitty would have found in it an excellent refuge from his importunate wife.

Virtual Reality (VR) is the latest in fantasyware -- a three-dimensional, computer-simulated landscape in which, unlike the dreamworld created by novelists and movie-makers, the spectator becomes the performer and masterminds the show.


And thanks to N Seshagiri, head of the Delhi-based National Informatics Centre (NIC), Indians may soon be able to sample the "other worlds" of VR. Seshagiri is developing two "virtual" galleries -- a simulation of the cosmos that is nearly complete and an art gallery, with an exhibition of paintings by Raja Ravi Varma, the 19th century painter from Kerala.

Seshagiri's cosmos software was created using astronomical data garnered by astronomers over centuries, such as star catalogues, periodicity of comets and asteroids and information about nebulae, galaxies and other cosmic objects and events. "Just simple 10th standard Newton's laws of motion," he says, his excitement nevertheless evident. "Starting with any point of space and time, you can build up the entire edifice of the universe." He explains that his cosmic database has enough memory space to accommodate new cosmic phenomena, such as the formation of a star or galaxy.

The sky at which the VR user gazes corresponds to the sky over the NIC office. But if you want to compare notes with another skygazer stationed, say, in New York, all you have to do is change the polar coordinates to find yourself under the New York sky.

Also, the computer-simulated universe is dynamic and the user can travel back or forward in time. For instance, you can witness the last coming of Halley's comet. Or, you can put time in forward gear, and watch a sneak preview of Halley's comet's next visit.

Another remarkable feature of the star gallery is its telescopic effect. With the help of a computer mouse, you can zoom in on any star, planet or galaxy. You can even see the universe expanding, with galaxies flying apart. Relative motion makes users feel as if they are approaching the cosmic object rather than the other way round.


The work on the Ravi Varma gallery is in the incipient stage, with Seshagiri still working on the building. He proposes to scan reproductions of the artist's paintings on his computer. But as a scanned image is a poor copy of the original, it will have to be touched up, for which he has "a very sophisticated brush, a software called Morphics, which can refine any jagged texture to a desired degree of smoothness".

"The most remarkable thing about the Morphics programme is that using it, I can even improve upon the original as far as colour texture is concerned. Ravi Varma had a genius for blending colours unobtrusively, but even he could manage only what was humanly possible. The Morphics programme, which has about 2,000 colours, gives me a chance to actually improve on the master."


Seshagiri plans to add two more accessories to his VR system. One is an ordinary treadmill -- an upright wheel with movable steps along its inner side that revolves when a weight is placed on the steps -- to give the user a sense of locomotion in the virtual world. "But there is a problem. The perceptual lag between the mechanical motion of a leg and its corresponding computer response is much too long. The delay disorients the user," he says.

The other accessory is a fibre optic glove, which can communicate instantaneously between the user and the computer and Seshagiri says, "Using optic fibres ensures there is no perceptual lag."

"My aim is to make low-cost VR systems, which can be used for various applications," says Seshagiri. For example, using VR, physicists can play with virtual electrons that behave like real ones and architects can wander through a virtual building designed by them. He has been approached by the Defence Research and Development Organisation (DRDO) to develop VR systems for defence applications, such as flight simulators and simulating battle-field scenes to train soldiers.

Seshagiri has also pioneered a unique approach called co-cognitive adaptive VR, which allows more than one user to share a common virtual world. This has applications in tele-conferencing, allowing people to meet in a virtual conference room, without leaving offices that may be thousands of kilometres apart.

The hardware needed for superior VR systems is prohibitively expensive at present. Seshagiri's system, which comprises a 486-level WIPRO computer, a scanner, imported headgear, a video and a few accessories such as fibre-optic gloves would not cost less than $20,000. To make VR affordable in India, says Seshagiri, technologists must concentrate on improving the software because hardware costs are too high.