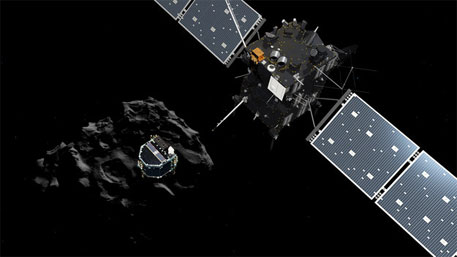 When European Space Agency’s Rosetta mission successfully placed a small spacecraft on the surface of a speeding comet on Wednesday, history of space exploration was rewritten. With this feat, space agencies will now be able to explore the comets like planets and other members of solar system. According to a New York Times report, one of the key mysteries that Rosetta will explore is whether Earth’s oceans are filled with melted comets.

On Wednesday, the mechanical space traveller called the Philae touched the surface of comet 67P after leaving the mother ship Rosetta, some 499 million kilometres from the Earth. “Rosetta is trying to answer the very big questions about the history of our Solar System. What were the conditions like at its infancy and how did it evolve? What role did comets play in this evolution? How do comets work?” said Matt Taylor, European Space Agency (ESA) Rosetta project scientist.

“Our ambitious Rosetta mission has secured a place in the history books: not only is it the first to rendezvous with and orbit a comet, but it is now also the first to deliver a lander to a comet’s surface,” noted Jean-Jacques Dordain, ESA’s director general. “The agency’s director-general, Jean-Jacques Dordain, described the touchdown as “a big step for human civilisation.” According to ESA, those first images soon revealed the comet as a world littered with boulders, towering cliffs and daunting precipices and pits, with jets of gas and dust streaming from the surface.

ESA’s comet-chasing Rosetta mission has spent much of the second half of October orbiting Comet 67P/Churyumov–Gerasimenko at less than 10 km from its surface. Rosetta was launched on March 2, 2004 and travelled 6.4 billion kilometres through the Solar System before arriving at the comet on 6 August 2014.