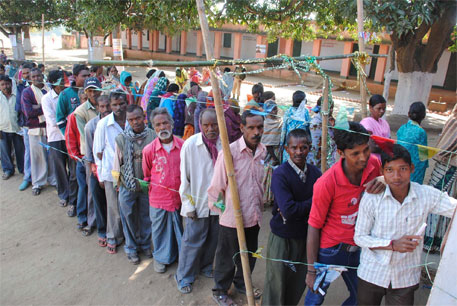 In Jharkhand, an alliance of Bhartiya Janta Party with 37 seats and All Jharkhand Student Union (AJSU) with five seats is set to form the new government after the assembly elections.

The results that will bring a two-party alliance (BJP-AJSU) to power have also been an embarrassment for many former chief ministers and leading tribal leaders.

Sitting chief minister, Hemant Soren who had cautiously contested the election from two constituencies—Dumka and Barhet—lost the prestigious Dumka seat.  Dumka was considered a fort of JMM. Louis Marandi of BJP defeated Hemant Soren by more than 5,000 votes. Soren, however, won the Barhet seat.

But the most embarrassing defeat came for AJSU head Sudesh Mahto who was rumoured to be a probable deputy chief minister. Mahto lost the election to a novice 26-year-old politician, Amit Kumar, who contested for the first time. Kumar defeated Mahto by more than 20,000 votes.

Voters in Chaibasa had little interest in BJP candidate J B Tubid, a senior bureaucrat who took voluntary retirement to contest election. Tubid lost by 30,000 votes to Deepak Barua, a JMM candidate.

Ramesh Sharan, professor of Ranchi University opines that poor development and ruling corruption led voters to teach lesson to senior party leaders. “Voters have punished key politicians of the state who failed to bring any development to the state,” he said.

Defeat of all former tribal chief ministers means that the people in Jharkhand want to a new leader. Speculations are rife that the state might get its first non-tribal CM. Front runners include Ragbhubar Das from Jamshedpur, Jayant Sinha, son of former union minister Yashwant Sinha, Ganesh Mishra, C P Singh, Saryu Roy and Anant Ojha.

Louis Marandi who defeated Hemant Soren at Dumka seat has emerged as a strong tribal leader. This election was, however, the first one in the state when the land issues were nearly forgotten and the political parties failed to strongly raise the problems of rehabilitation and land acquisition.

Prem Mittal, spokesperson of BJP and Vinod Pandey, a member of JMM core committee accepted that raising more issues that affect common man would have helped their respective parties to win more seats. “Mining and land acquisition issues would have helped party increase vote percentage. We realise that mistake,” Panday told Down To Earth.

Jharkhand is a state marred by political instability. In 14 years of its existence, the state has seen nine CMs, eight governors and 10 chief secretaries. Experts also opine that the debacle of former CMs and senior leaders is a message by the voters that they want a new face as CM now. People are looking forward to a corruption free and pro-development CM.