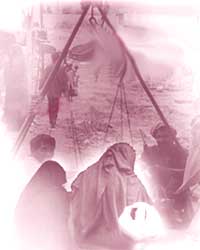 upds was replaced for at least two reasons:1) Above poverty line (apl) households were also picking up these 'rations'; 2) The system was full of 'leakages'. But tdps hasn't turned out to be any better, as a recent Planning Commission study shows

tdps covers only 57 per cent of an estimated 45.41 million bpl households

The study identifies the processes by which this happens:

68 per cent of all such diversion to apl households occurs in 3 states: Tamil Nadu, Andhra Pradesh and Karnataka

50 per cent of all tdps foodgrain lifted in Tamil Nadu goes to apl households. In Karnataka, this proportion is 42 per cent and in Andhra Pradesh, 36 per cent

Leakage occurs throughout the chain. When foodgrain is transferred from the central pool to states, thence to districts and blocks, and even from the fair price shop ( fps ) the grain ends up in.

Only 42 per cent of the foodgrain issued from the central pool reaches bpl households. The rest are diverted, or leak away

Punjab and Bihar are states with the maximum leakage (above 75 per cent of all foodgrain issued). Andhra Pradesh, Karnataka, Madhya Pradesh, Maharashtra and West Bengal are low-leakage states (below 25 per cent; but note that the first two are also high-diversion states)

• Do bpl households get the 20 kg of foodgrain they are entitled to every month? Only in one state, Himachal Pradesh (here, the grain is door-delivered). bpl households in West Bengal and Tamil Nadu are the luckiest: they get 19 kg foodgrain. In Bihar and Punjab, only 5 kg of the entitled 20 kg reaches bpl households

• Is tdps a budgetary conundrum for the government? No, there are no puzzles here

For every rupee of tpds -related budgetary subsidy by the Centre, 42.3 paisa reaches bpl households. 36.4 paisa passes out as leakage; 21.3 paisa gets diverted to apl households

• There's nothing fair about fps. These shops, meant to retail tpds foodgrain, are unviable. Only 22 per cent of fps earn an annual return of 12 per cent on working capital. Is this because, in most states, these shops are privately-controlled?