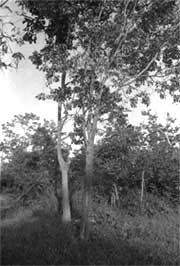 for thousands of years now, a stumpy tree prized for its heartwood and sandal oil, has been a source of pride for India. Yes, it is none other than the sandalwood tree. However, indiscriminate harvesting and rampant poaching have left the once luxuriant stands in shambles. It is feared that such a loss may have jeopardised the genetic resources of the tree.

Unfortunately, few programmes have aimed to systematically address the conservation of such a precious resource. Lack of information on the extent of genetic variability of populations has been a major handicap in formulating conservation plans for the tree species. Generating genetic diversity maps of economically important species, such as sandal, could lead to the identification of 'hot-spots' of genetic variability. These spots could be targeted for conservation, as preserving the genetic resources helps to save as large an array of genes as possible, with the tacit assumption that these genes may impart certain fitness attributes to the plants.

A group at the University of Agricultural Sciences (uas) and the Ashoka Trust for Research in Ecology and the Environment (atree), a non-profit organisation based in Bangalore, have attempted to develop a genetic diversity map of sandal. About 800 sandal trees from 19 sites in the Western and Eastern Ghats and Deccan Plateau across Andhra Pradesh, Kerala, Karnataka and Tamil Nadu were assayed for their genetic variability. Some key enzymes of these trees were analysed using the electrophoretic technique. The results indicate that the populations from the Deccan Plateau region were most diverse, with an average heterozygosity (dissimilarity in genetic material) of 34.7 per cent, compared to that of Western Ghats (31.2 per cent) and Eastern Ghats (25 per cent). Except for three or four populations from the Deccan Plateau, all other sandal populations were found to suffer from heterozygote deficiency, probably due to inbreeding. In fact, the percentage of observed heterozygosity was positively correlated with the density of the sandal populations, suggesting that gene flow and mating opportunities might be constrained in small fragmented populations or in populations with sparse distribution of the trees.

Based on these findings, it is reasonable to conjecture that sandal is losing its genetic variability and this could lead to drastic consequences. It could result in seemingly effects such as reduced reproductive performance and increased susceptibility to diseases, which could eventually lead to global extinction of the species. Besides this, the loss could also halt the efforts in genetically improving the sandal trees for their heartwood oil content.

According to experts, an intriguing factor responsible for their genetic variability loss might be the recently lifted ban on the cultivation of sandal. Because of the ban, there certainly was an upsurge in the illicit felling of trees. Moreover, due to the stringent rules (that felling of sandal was a criminal offence in Karnataka), people tended to prevent sandal trees from growing in their farms to avoid the later responsibilities of safeguarding it. Thus, seedlings and saplings that would have generated genetic variability were destroyed.

The spatially explicit map of the genetic diversity for sandal generated by the uas and atree team holds major implications for the conservation and improvement of sandal in the country. Besides helping to direct in situ conservation efforts in the hot spots of variability in the Deccan Plateau, the genetic diversity map paves the way for identifying genetic material associated with desirable traits such as high heartwood content and oil quality. Clearly developing such genetic diversity maps for more of the economically important and threatened tree species can help arrive at rational conservation programmes and accelerate efforts towards the genetic improvement of tree species in the country.