An insecticide obtained from marigold flowers is effective against mosquito larvae 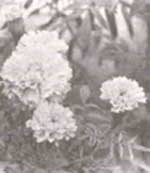 RESEARCH at the Delhi-based Institute of Nuclear Medicine and Allied Sciences (INMAS) have developed an ecofriendly and biodegradable insecticide from marigold flowers.

Scientists have found that 2 compounds present in the flower -- alphateriophene, or alpha-T, and erythrosin-B -- are effective against the larvae of the malaria-causing Anopheles mosquito as well as against the Culex, which causes Japanese encephalitis and elephantiasis.

Says H C Goel, joint director of INMAS, "The entire process is so simple that anyone can extract this pesticide by merely crushing the petals of the marigold." To obtain alpha-T, for instance, discarded petals and roots of the golden marigold are crushed in alcohol. As the alcohol evaporates, it leaves behind a yellow liquid rich in alpha-T.

Studies at INMAS concluded that alpha-T and erythrosin-B are biodegradable, ecologically-safe and photosensitive. Alpha-T gets activated with wavelengths of light close to ultraviolet (300-400 billionth of a metre) and erythrosin-B at higher wave lengths. Studies reveal that the efficacy of alpha-T as an insecticide is the highest in sunlight, decreases in fluorescent light and is the least in darkness. Erythrosin-B is effective against Anopheles and Culex only in sunlight.

The efficacy of alpha-T is comparable to that of most pyrethroids -- insecticides obtained from chrysanthemum. But unlike some pyrethroids, alpha-T has no adverse side-effects on other organisms, says Goel. Synthetic analogues of alpha-T have been well researched by Goel and other scientists, but none have been found to be better than the naturally occurring alpha-T.

Delhi-based Malaria Research Centre's director V P Sharma feels that alpha-T needs to be further studied for any toxic effects on mammals and human beings. A study is required to determine if this pesticide can make its way into the food chain. Alpha-T's commercial viability also needs to be analysed.

Goel adds that observations that mosquito larvae were absent in the vicinity of marigold led the scientists to examine the flowers for an active larvicidal element. He suggests that marigolds should be planted near all stagnant waterbodies. Alpha-T exudes out of the root and dissolves in the surrounding water and any mosquito larvae that consume this water are killed in about 8 hours.