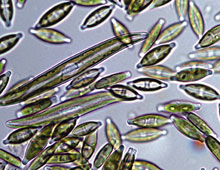 marine life stirs oceans enough to affect climate, says a study by scientists of the Florida State University. Movement of winds and water has a bearing on climate. Previously, it was thought that the difference in temperature resulted in the movement of water and hence different climatic conditions, but the role of marine organisms was not highlighted. Now, the study reveals that the activity of marine organisms plays a significant role in the movement of water, which thus affects climate.

Phytoplanktons, the foundation of the marine food chain, generate five times the annual total consumption of energy by humans, says the study which will be published in the November issue of the Journal of Marine Research. "The effect of the activities of marine biosphere on oceans is the same as that of winds and tides. The mechanism is called bioturbation, or the turbulence caused by marine organisms," says William Dewar, the lead author of the study.

Calculations from the scientists reveal that the mechanical energy from phytoplanktons driving that turbulence is comparable to the energy that drives winds and waves. Oceanographers led by Dewar calculated that the amount of chemical power stored by phytoplankton in the form of new organic matter is about 63 tetrawatt (1 tetrawatt equals 1 trillion watt). Their study found that the organisms that feed on phytoplankton use one per cent of their chemical energy for physical (mechanical energy) activities such as swimming.
Explaining how it happens, Devar says, "Biosphere mixing provides about one-third the power required to bring the deep, cold waters of the world ocean to the surface, which in turn completes the ocean's conveyor belt circulation critical to the global climate system." The study says that about 1 per cent of this power is invested in mechanical energy in the aphotic ocean (part of the ocean where light does not reach and photosynthesis does not occur)

It is a fact that highly sensitive plants act as reliable indicators of environmental changes at or near the ocean surface through either sudden decline or rapid growth. Scientists suspect that phytoplanktons affect and reflect climate change when large, sustained plant populations gulp carbon dioxide from the atmosphere during grand-scale photosynthesis.