Cabinet yet to approve the mission 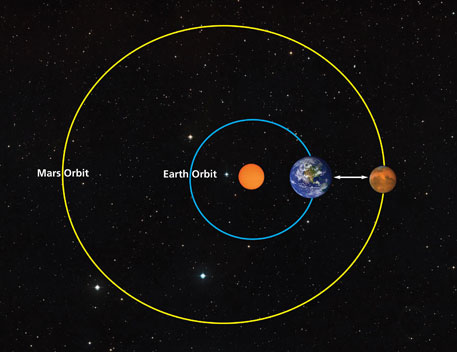 In its budgetary allocations in March, the government had earmarked Rs 125 crore to the Indian Space Research Organisation (ISRO) for the ambitious probe to the Red Planet. Though the Cabinet is yet to approve the mission, according to sources, the talks are in its final stages. A series of cabinet meetings are underway and approval may be granted any day soon.

When contacted, ISRO’s press cell informed that the agency’s chairperson will hold a conference soon after approval is granted.

ISRO is lobbying hard for November 2013 for a reason. Ajay Lele, research fellow specialising in space technology and security at the Institute for Defence Studies and Analyses (IDSA), Delhi, says, “ISRO has been quite proactive about getting the approval to meet the deadline–and for a good reason.” The distance between the two planets will at a minimum during November next year, he explains. U R Rao, former ISRO chairperson, agrees. “It is true the 2013 window is when the two planets are going to get the closest.

After that this opportunity will not come until the beginning of 2016 or 2018. I wouldn't be surprised if other countries, too, plan to launch their missions at this time,” he says. The two planets can get as close as 55,000,000 km. This has certain advantages like less fuel and time required to complete the mission. In fact, NASA is also planning to launch a Mars probe in November 2013. Called the Mars Atmosphere and Volatile Evolution Mission, the probe will explore the planet’s upper atmosphere, ionosphere and interactions with Sun and solar wind.

Rao says India's mission will help study the Red Planet’s atmosphere. “Earth, Mars and Venus are relatively close to each other and similar in terms of size and shape, yet their atmospheric conditions are radically different. The probe will help us answer some of these differences,” he adds. He further says that such missions hold promise for future generations. “We're running out of fossil fuels and coal, and knowledge of other planets could pave the way for mining their resources in future,” he says.

The mission will also be a quantum leap for India in terms of distance travelled, adds Lele. “So far, India’s satellites have gone up to 36,000 km above the surface of Earth. Chandrayan-I, India's unmanned mission to moon, travelled up to 400,000 km.”

Only few countries like the US, Russia, Europe and China have managed to send missions to Mars. An endeavour of this nature will require a nationwide effort from space and physics scientists. When asked whether any preparations are under way at his institute, J N Goswami, director of Physical Research Laboratory, Ahmedabad, was tight-lipped.

“We haven't received any word from the department of space on any such project,” he said. Goswami, however, indicated that as part of their routine lab work they are working on instrumentation that can be utilised for long-distance missions like the ones to Mars. “However, right now everything is at the level of the lab and it will take at least a year to convert it to technology that can be sent to space. If we get a go-ahead from the space agency, we will start work on it,” he says.