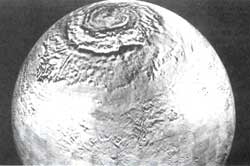 IN 1877 Italian astronomer Giovanni pwelli observed on the planet curious markings that he called 11channels). The discovery caused r to wonder if these channels A the creation of intelligent kas. In the 1890s, American Omer Percival Lowell went so far maest that the channels were is of crop fields fed by a planet bription network.

Ow"er, Lowell's theory, long vigorously, was finally dis fantasy in the light of photo nce from the us spacecraft, which flew past the planet in ner's testimony notwith ientists still speculate about sc and watery past.

Recently, US scientist, studying a awteorites that are believed to ated on Mars, concluded probably did exist on the the early years of its existence. They found that the deuterium (a rare form of hydrogen that weighs almost twice as much as the common form) to hydrogen ratio in water found on these meteorites was 5 times that found on Mars' surface today. But it was the same as that in the Martian atmosphere. This suggests that shortly after the planet was formed, any water on its surface disappeared as tectonic and meteoritic impacts hurled jnost of the hydrogen into the atmosphere (Nature, Vol 370, No 6488).
Mars has a special fascination for scientists because of its similarity to Earth it, too, has polar icecaps and seasons, shows evidence of having had fluid water on its surface, and might have been home to some form of life. Interest has been further spurred by recent proposals about sending human explorers to the planet and, possibly, to tap its resources (See box Moon to Mars).

Indications of water on the s of the planet have come from 2 sources: the lie of the Martian lav rites r1n 1971, the us spacecraft 9 which orbited Mars revealed ch confirming Schiaparelli's observ and valleys on the Martian face theorists believe, were sculpted b ing water. Water could have str only if the Martian surface was n er than UPC, when water turns to Mars today is a cold desert with perature of about -55'C. Fluic cannot exist under this conditi can life.

Therefore, if early Mars was warmer, what made it so? Says scientist Jayant Kar of the Delh National Physical Laboratory, recently, it was believed that car could have been warmed subsc by the greenhouse effect of a del bon dioxide atmosphere. But th problem. Mars receives only as much light as Earth does because seems to be tective ice cover, similar to what one sees in subterranean Antarctica today.

It appears that the Martian picture is still hazy. Says astronomer Steven Squyres of Cornell University in the us, "We really have too few observations of Mar to answer many of the most basic questions about the planet. What is needed now is further exploration."

Indeed, us scientists are thinking of launching a comprehensive mission to map the planet's surface, deploy network stations there, and to bring samples of Martian materials back to Earth for analysis.