Life on Mars may have gone undetected by earlier probes 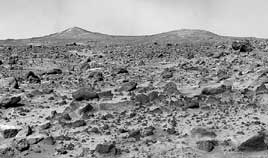 the turning point in the history of planetary exploration came in 1976. Two Viking crafts, launched by the us, tested the soil on Mars for microorganisms. Unfortunately, they found none. Scientists concluded that life did not exist on Mars, or at least on the parts of the planet where the spacecrafts had landed. But now, a team of scientists at the Scripps Institution of Oceanography, California, usa , have claimed that the spacecraft could have missed out on signs of life on the Martian surface.

The Martian soil collected by the Viking missions was analysed inside the spacecraft in an automated fashion. The soil was heated and the gases were analysed by 'gas chromatography-mass spectrometry', a technique that enables scientists to see if the soil had at one point contained any organic matter. The Viking missions probed about four inches deep into the Martian surface but couldn't find any traces.

That was where things stood till last year when some scientists suggested that certain chemical reactions of the gases present in the Martian soil could sustain microbes just beneath the surface. Jeffrey Bada and his co-workers at Scripps Institution, usa, have now suggested that such colonies of microorganisms could have escaped the detection mechanism of the Viking. The group recreated the same tests using samples of 'simulated' Martian soil -- powdered rock, heated to remove organic contaminants. They seeded the rock with Escherichia coli bacteria, and allowed colonies of the microorganisms to develop. The dust was then analysed with state-of-the-art equipment, similar in principle to the Viking testing experiment. From this the scientists estimated the maximum number of cells the real Martian soil could contain while escaping detection in the Viking study. The results indicate that as many as 30 million cells per gramme could have evaded detection. The next mission to Mars is in 2005. The craft launched will land on Mars in 2007. This craft has been equipped with a new automatic device devised by Bada's team, which is about 100 times more sensitive than the Viking instruments (Earth and Planetary Letters , Vol 185, p1 and Proceedings of the National Academy of Sciences , Vol 98, p7970).