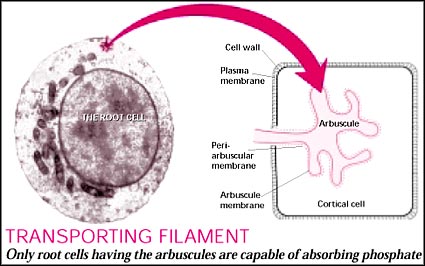 science seems to have inched closer to answering a question that has nagged agriculturists for almost 100 years -- how to make an essential plant nutrient present in the soil available to crops in adequate quantity. A team of us scientists has recently uncovered a plant gene that is involved in transferring phosphate, the nutrient, from soil-dwelling fungi to the plant cells. Understanding the functioning of the gene would open up the possibility of manipulating the fungi as well as the plant genetic system to deliver additional quantities of the nutrient to the crops.

Among the three key plant nutrients -- nitrogen, phosphorus and potassium -- phosphorus is the most difficult for the crops to absorb from the soil. Microbes present in the soil convert phosphates into an immobile, organic form. As a result, most of the nutrient gets locked up in the soil, forcing farmers to apply phosphatic fertilisers to improve crop yields. But even rock phosphates -- the source of phosphatic fertilisers -- are non-renewable resources and it is feared their stock will deplete over the next century.

Therefore, the only ray of hope for agriculturists is the fungi-gene symbiosis. The fungi, Arbuscular mycorrhiza, colonise the plant root. They have thread-like filaments that run deep inside the soil. These filaments are able to suck phosphate in small quantity from the soil, which is then transferred to the plant roots. Though extremely important from agricultural point of view, very little is known about this interaction between the fungi and the roots. Consequently, scientists have not been able to evolve ways to exploit the colossal phosphorous wealth of the soil.

The discovery of the gene may provide a way out. The find was disclosed at the annual meeting of American Society of Plant Biologists held in Florida on July 28, 2004. The gene was found by Maria Harrison and her colleagues from the Boyce Thompson Institute for Plant Research at the us-based Cornell University. The team worked on the legume plant Medicago truncatula -- a species commonly used in the laboratory to study various flora processes.
It found that the fungi initially grow in the spaces between the cells of the plant roots, but slowly they permeate into the cells, where they form branched, thread-like filaments called the arbuscules. Although physically present inside the cell, the arbuscules remain separated from the cytoplasm (main constituent of the cell) by a layer called the peri-arbuscular membrane. But this membrane is in contact with the plasma membrane -- the protective layer of the cell.

During their investigations, the scientists stumbled upon a gene, mtpt4, which is present only in those root cells that contain arbuscules. Detailed studies ascertained that mtpt4 is an integral component of the peri-arbuscular membrane. The gene helps transfer the phosphate released by fungi through the peri-arbuscular membrane into the cell. "The gene is a fundamental part of the phosphorus transfer. Without it, the process would not be possible," Harrison informed the meet.

She said considerable work lies ahead before scientists learn to exploit the discovery. But when it happens, the pay-off to growers and the environs could be substantial: more efficient plant growth with less use of phosphorus-based fertiliser, and a subsequent reduction in the phosphate runoff in surface water. "Phosphorus in our lakes and rivers often nourishes undesirable algae growth. Agriculture is a major source of phosphate pollution. Therefore, any effort of biologists aimed at improving the phosphate uptake of plants will make agriculture more sustainable and less harmful for the environment," said Harrison.

The scientists would now undertake studies to scrutinise whether there are other genes that are involved in the phosphate transport.