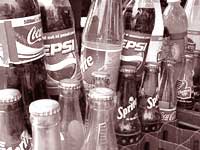 for the first time anywhere in the world, soft drink majors Coca-Cola and PepsiCo will have to specify the ingredients, including pesticide content, on the labels of their products. On December 6, 2004, the Supreme Court (sc) dismissed the special leave petitions filed by Pepsi Foods Limited and Hindustan Coca-Cola Beverages (Private) Limited, challenging the October 8, 2004, order of the Rajasthan High Court (hc) that imposed these labelling requirements on the manufacturers of carbonated beverages and soft drinks (see 'Confess now', Down To Earth, November 15, 2004).

An apex court bench comprising chief justice R C Lahoti, justice D M Dharmadhikari and justice G P Mathur maintained "the consumer has the right to know what he consumes". "We do not see anything unreasonable or unconstitutional in the hc order", it ruled, adding that the order was in public interest. It asked the companies to approach the hc to work out the procedural and practical modalities for implementing the order. It may be noted here that the cola companies had approached the Rajasthan hc in last month, challenging its judgement, but their plea was rejected.

Senior advocates Harish Salve and Arun Jaitley, appearing for Coca-Cola and PepsiCo, respectively, initially said the labels of their products would read: "the contents may have traces of pesticide which is well below the prescribed standard." This claim was strange because India doesn't have any prescribed standards for soft drinks as yet. In fact, both the companies have vehemently protested against setting standards for their final products. Salve also argued that even milk and apples contained pesticides. But the court contended that it wasn't milk and apples but soft drinks that the children were addicted to.

Swati Bhati, the advocate in Rajasthan hc who had filed the petition that led to the hc order, says the cola companies told the sc that the order should also apply to fruit juices. But the court said they first have to implement the order and then approach the court separately if they want it to be implemented for other products. The sc has given the companies two weeks time to approach the Rajasthan hc, following which the order has to be implemented. They can approach the sc again if the hc does not entertain their applications regarding the manner in which the pesticide content is to be displayed.