Will the real land sharks please stand up? 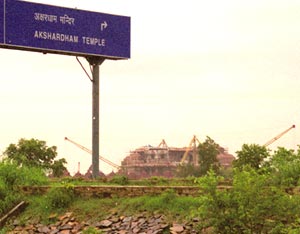 A recent direction by the Supreme Court of India (sc) on the upcoming Akshardham temple in Delhi has opened a can of worms: blatant master plan violations, by the Delhi government itself. These 'urban development' projects are encroachments on the Yamuna riverbed, duly 'cleared' by the Delhi Development Authority (dda), in charge of protecting the riverbed and implementing the master plan. "Akshardham temple, spread over 23 hectares (ha), is small fry. There are other government-owned projects, all on the riverbed, in clear violation of the Master Plan for Delhi 2001 (mpd 2001). Rather than removing such encroachments, dda is trying to legalise them by changing the land-use plan of Delhi and floating a new mpd-2021," says a professor of New Delhi-based School of Planning and Architecture (spa), who doesn't wish to be named. dda is tightlipped on the issue. In spite of repeated requests, B K Jain, director (planning), dda, who is also responsible for mpd-2021, refused to comment on the riverbed violations.

On August 9 this year Akshardham temple, under construction for last three years, suddenly hit the news. The reason: a public interest litigation (pil) filed by the Uttar Pradesh State Employees Confederation claiming the land on which construction is going on belongs to Uttar Pradesh Irrigation Department (upid). In response to the pil, the sc issued notices to the upid, dda, and A K Iyyar Purushottam Sansthan, which is constructing the temple. According to Vishwajit Singh, petitioner's counsel, "Land from the Delhi Railway Bridge on the north to the Chilla Regulator in the south and bounded by the river Yamuna ... belongs to upid. Way back in 1950, the department leased this land to Delhi Improvement Trust, a predecessor of dda, for a period of five years. The lease expired on June 15, 1955. Since then the land has not been returned to upid." The pil warns, "Any construction between the river and the marginal bound will unduly interfere with environment and would lead to narrowing of the river. Further, during the flood season, the water being unable to spread will inevitably enter the city and villages, resulting in heavy losses".

The problem is not of land ownership. A move is consciously afoot to encroach upon the riverbed in the name of 'development and beautification', in clear contrast to the Delhi master plan. This ignores the fact that, in 2000, the Central Ground Water Authority under the Union ministry of water resources had notified the riverbed's groundwater recharge potential.
A master plan is a land use blueprint of a city, matching resources to demands. It also makes projections for the future. Delhi's development is guided by the Delhi Development Act, 1957, which requires a master plan and several zonal development plans (zdps). mpd and zdp are statutory documents prepared in accordance with the act. At present, Delhi follows mpd 2001, prepared by the dda in consultation with experts, planners and the general public. Any modification to this plan requires detailed survey and issuing a public notice that invites comments. The latter is mandatory for any land use change. It is also the condition flouted the most.

mpd-2001 specifies nine categories of land use. The riverbed falls under "agricultural and water body", and is part of the city's O-Zone. The present area of Yamuna riverbed is 9,700 ha, out of which 1,600 ha is under water and 8,100 ha dry land. Subsection (1) of section 8 of 1957 Act categorically says, "simultaneously with the preparation of Master Plan or as soon as may be thereafter, The Authority (DDA) shall proceed with the preparation of a Zonal Plan for each Zones into which Delhi may be divided (emphasis added)". But till date dda has not prepared the zdp for the riverbed. In fact, it has changed the category to "public and semi-public" to accommodate the Akshardham temple. According to newsreports, dda has received Rs 1.3 crore. On being questioned by Down To Earth on this issue, Jain refused to comment.


Shamefully, the authority responsible for protecting the riverbed is today its most senseless exploiter (see box: The blame game begins). A few years ago, Pune-based Central Water and Power Research Station, which monitors the Yamuna's khadir (land taken up by the width of a meandering river), had warned that half the khadir had already been encroached upon. Then in 2003, it conducted a flood plain study, recommending to both dda and the Yamuna Standing Committee (it overlooks development of the Yamuna in its Delhi stretch) that encroachments be stopped immediately. But both bodies have failed to take any action. Rather they seem to be hand in glove with the builders, alleges a New Delhi-based planning consultant.

Because of increasing encroachments, the Delhi High Court had ordered he government on March 3, 2003 to "forthwith remove all unauthorised structures, jhuggies, places of worship and or any other structure unauthorisedly put up in Yamuna bed and its embankment, within two months". Whereas the former Union minister of tourism and culture, Jagmohan, removed the Yamuna Pushta slum, all government structures have been left untouched (see: Beautification Drive, Down To Earth, May 15, 2004).


In keeping with master plan violations, industries in Delhi are also vying for their share in the pie. The operation of industries in residential areas has been debated for many years now. Such units operate in violation of mpd 2001. Now, moves are afoot to 'regularise' residential areas, with more than 70 per cent industries, as industrial areas. A thornin the flesh of this move is a May 7, 2004 sc order directing closure of all industries in residential areas, which have come up after August 1, 1990, except those at the household level. Industries are to be shut down in a phased manner based on their mpd-2001 categorisation. The first to face the axe are category f industries: they are to be closed by September 7, 2004. But this ruling could be subverted. Recently the Delhi assembly cleared a motion to amend mpd 2001 and push for regularisation. The lieutenant governor of Delhi, B L Joshi, is so far playing safe. In an August 13 meeting with dda, he clarified that the order would be strictly followed.

Industrialists have pinned their hopes on mpd-2021, at present being finalised. Explains J R Jindal, president of the Delhi Factory Owner's Federation (dfof) and a member of the experts committee on industry for mpd-2021, "As per the new master plan, there will be only two set of industry categories in Delhi -- negative, and household. In case mpd 2021 comes into force, the order becomes null and void."

Experts feel this isn't possible. mpd 2021 can be finalised only after a public notice is issued and comments invited. Such a process will take at least 90 days, whereas the deadline [September 7] is round the corner. But Jindal is still optimistic. "More than 20 Congress mlas have written to the prime minister, Manmohan Singh and the Union minister for urban development and poverty alleviation, Gulam Nabi Azad to get mpd-2021 implemented as soon as possible," he says. Further dfof has requested the Delhi administration to file another writ petition in the sc in front of a five-judge bench to get the execution date delayed.

It is clear that the only solution government can come up with to tackle master plan violations is to change the law, the softest option. Indeed, dda has floated its Riverbed Re-development Project; cycle tracks, walkways, aquaria and food courts will dot the river bank. dda seems in no mood to relent. And if past experiences are anything to go by, dda's mpd-2021 is sure to raise a storm. And more violations.