Greet the oldest living being on its 250 millionth birthday 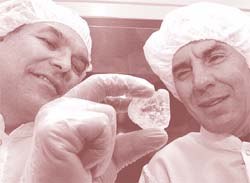 ancient bacteria trapped in a salt crystal for 250 million years are the world's oldest living beings, claims a team of microbiologists led by Russell Vreeland of the West Chester University, Pennsylvania, usa . The microscopic creatures are ten times older than any living organism known to humankind. The researchers discovered the crystal in a drill sample taken from an air intake shaft at the Waste Isolation Pilot Plant ( wipp ), the world's first underground dump for radioactive waste, located in southeastern New Mexico.

The bacteria, called Bacillus permians , were present in a salt fluid inside the crystal. The microbiologists drilled a hole to extract the fluid. They then placed the fluid in a nutrient solution, after which the bacteria revived and began to grow. "They were completely protected," Vreeland told the British Broadcasting Corporation . As the crystal was intact and belongs to a seabed formed 250 million years ago, the microbiologists concluded that the bacteria were the oldest living beings. "The crystal proved to be the most stable environment for the bacteria's survival," Vreeland explains. Bacteria can live in a death-like state for a long time by forming spores. Spores are resistant structures that help the microorganism to adapt to harsh conditions. All the metabolism activity of the bacteria comes to a halt when it is in the spore state. Bacterial spores can easily survive for a few hundred thousand years. Only exposure to radioactive waves can kill them.

The discovery has reopened the debate about the origin of life. The researchers say that the chances that B permians came from some external source are about one in a billion. The claim of the microbiologists have been questioned by the scientific community. Reports of ancient bacteria recovered from rock and coal have not stood up to scientific scrutiny in the past.