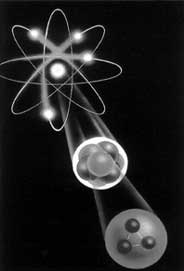 determining the atomic structure of solid materials is important for material scientists, since properties of every compound depends on it. Apart from the internal structure, the arrangement of the atoms in the surface layers is also crucial because this determines properties like friction and chemical reactivity.

Though several conventional methods can determine the atomic structure of the compound, studying the surface organisation of atoms was quite difficult till now. However, physicists at the University of Erlangen-Nurnberg in Germany have found a technique that could easily give a three-dimensional image of the atomic arrangement on the surface of solids (Physical Review Letters , Vol 79, No 24).

The scanning-tunnelling microscope and x-ray diffraction are some of the tools that no material scientist can do without.The microscope is used to get a basic idea of what the structure of the top most layer of the solid looks like, while x -ray diffraction gives the crystal structure. But the method used most frequently to scan surface layers is the low energy electron diffraction or leed.

leed is the diffraction or the bending of an electron beam as it passes near a material or through the spacing or "holes" in its submicroscopic structure. A 1924-theory of by French physicist Louis de Broglie says that an electron's wavelength is always inversely proportional to its momentum. So, fast-moving electrons have short wavelengths, and can pass through the "holes" between the atomic layers in crystals. A beam of such high-speed electrons should undergo diffraction when directed through thin sheets of material or when reflected from the surface of crystals.

As an analytical method, it is used to identify a substance chemically or to locate the position of atoms in it. This information can be inferred from the patterns that are formed when various portions of the diffracted electron beam cross each other and through interference, make a regular arrangement of impact positions. Recorded photographically or otherwise, such a distri-bution is called a diffraction pattern, which gives information about the nature and structure of the gas, liquid, or solid that caused the diffraction.

But breakthrough came in 1990 when the experts realised that the diffraction pattern generated by the electrons could be used as a hologram. If one atom is sticking out of the surface, it could be used to split the incoming beam of electrons into one reference beam and one which scatters off the surface. The split beam when recombined could give a holographic image. Klaus Hienz and his team in Germany used the disordered oxygen atoms on the surface of nickel. But the intensities of the diffuse diffraction pattern was very hard to measure. So they used a crystalline material, silicon carbide that gives much brighter holograms. They have managed to modify the holograph-reconstruction algorithms to generate the first ever picture of the surface of silicon carbide.

The technique, though useful, has its own limitations: it can only be used with materials which have some atoms sticking out of their surfaces. Moreover, its resolution is also half of the conventional leed methods. But the advantage of this new method is the ease with which a rough picture of the surface can be obtained without too many wild guesses. Physicists think that this technique harbours a lot of potential and can be used as a quick, easy way to obtain an approximate view of the surface. This can then be used to generate model in conventional leed algorithms and a more accurate picture can be obtained.