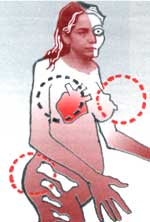 THAT the administration of the female hormone oestrogen to post-menopausal women prevents the tribulations associated with the painful process of menopause, has been common knowledge since the late 60s. Many women and their physicians considered this hormone as the closest thing in modern medicine to aIn elixir ofyouth, a drug that slows down the ravages of time for women.

Hormone replacement therapy (HRT), in which women are given oestrogen and progestin after men 'o-pause to reverse bone weakening or osteoporosis, among other things, JaS remained a contentious issue with conflicting reports on risks and benefits. HRT is known to increase the risk of breast cancer and endometrial cancer, while decreasing the risk of coronary heart disease (CHD) and hip fracture. Post-menopausal women are a difficult choice, as many fear breast cancer more than heart disease, whereas more women die of heart disease in America than of breast cancer. The chances of developing breast cancer are one in eight, compared to one in two for CHD in such women. In the us alone, breast cancer claims 43,000 lives every year, as compared to CHD, which kills 233,000, and hip fracture, accounting for another 65,000. Many physicians therefore consider that the benefits Of HRT far out- weigh the slight chance of developing breast cancer.

To assist such women and their physicians in deciding whether to administer or withhold HRT by anticipating the its effectiveness and risks, a team of researchers led by Nananda F Col ofthe New England Medical Centre, Boston, analysed data from a 12-year study of nearly 300 women aged between 30 and 74, some of whom were undergoing HRT, to study their life expectancy. They concluded that millions of women may well be missing out on up to three and a half years of life by failing to take the advantage HRT offers. The study points out that the benefits Of HRT, in reducing the likelihood of developing CHD, far outweigh the risk of breast cancer for nearly all women in whom this treatment is considered (journal of the American Medical Association, Vol 277, No 14).

The oldest and most familiar use of HRT is to relieve the hot flushes, night sweats, vaginal dryness and other symptoms of 'oestrogen withdrawal', that occurs around menopause, when the production of oestrogen by the ovaries starts decreasing. A recent study, called Nurses' Health Study, which followed 120,000 nurses for more than 10 years, found that post-menopausal women on oestrogen have about half the incidence of heart disease as compared to AM! those who did not take the horafr"@4, mones. HRT seems to improve a women's ratio of good cholesterol (HDL) to bad cholesterol (LDL), also maintaining the pliability of the blood vessels and reducing the risk of blockage.

In addition, oestrogen is an effective means of preventing osteoporosis, the thinning of bones that makes older women so vulnerable to fractures, particularly of the hip. Several small trials have also shown that oestrogen improves memory for post-menopausal women and may benefit, even if in a small way, women with Alzheimer's disease. HRT also helps preserve skin elasticity and general muscle tone. It helps maintain the collagen, that make the skin looking plumped up and moist.

Women who stand to gain from the findings of the study are those with a low risk of breast cancer and high risk of heart disease. The study says they can expect to live 41 months longer on an average, if given the treatment. But experts are cautious about recommendations to women of other countries, given the varying life styles and diets, and other social constraints. Ideally, they would like a controlled international clinical trial to see that the benefits of this research reach women all over the world. HRT may benefit women already enjoying a healthy lifestyle, as it further reduces the risk CHD.