May 2015 is deadline for draft climate agreement: UN 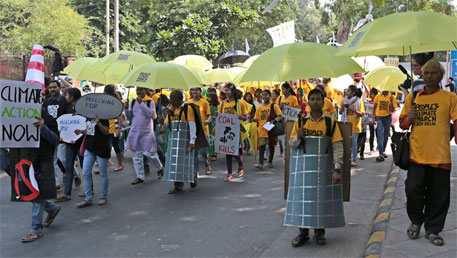 Days after the New York climate summit called by UN secretary-general Ban Ki-moon  to encourage countries to raise their commitments and pledges for climate change mitigation, the international agency has set a deadline for a draft climate agreement. Artur Runge Metzger and Kishan Kumarsingh, the officials who are coordinating the UN process, have declared that countries have a deadline of developing a draft text by May 2015.

The UN has called upon the nations to “reach out and build bridges and move towards common goals” and in this regard has hailed October as a crucial month. Post May 2015, this draft agreement would be translated into all official languages. This draft would then be assessed ahead of the Paris climate talks, which is scheduled to take place in December 2015. The UN officials urge and reiterate that time is running out and “we must get our act together”.

In the run-up to Lima climate summit to be held in December 2014, Bonn will hold a week long talks on climate finance later this month. It is expected that the purpose of the meeting would also be to comprehend what should come under “national contributions” towards a climate deal. Apart from mitigation pledges, finance to developing countries, adaptation measures could also be discussed as part of the “contributions”.