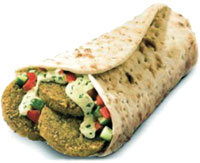 Balls of ground chickpeas tossed into vats of sizzling oil and served with pickles and salads inside a pitta bread is a standard fast food across much of West Asia.

But the ubiquitous, family owned falafel street stalls and cafes in Israel faced a challenge earlier this year when McDonald’s introduced the “McFalafel”, the global burger chain’s own version of the staple, in the country. Now, in a rare admission of defeat, it is withdrawing the McFalafel, saying it was an experiment that did not work.

“We realised that falafel does not belong in McDonald’s,” Omri Padan, chief executive of McDonald’s in Israel told a news website. “We wanted a vegetarian dish … but it did not succeed. It is gradually being removed.”

“It was disgusting,” a teenager said as she passed by a hoarding displaying the new McFalafel. Even visitors to Israel agree. The Taylor family from the UK, in Jerusalem for a party, said they would never patronise a “non-traditional” falafel outlet. “It is street food, not pre-packaged,” said Howard Taylor.