Me likes what me likes 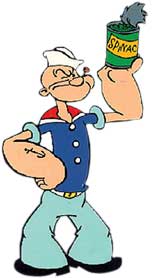 lucy wills, a British physician, accidentally discovered vitamin B9 in 1931 while working with anaemic and pregnant textile workers in Mumbai. She treated them with a diet of liver and yeast extract. In 1945, a synthetic form of the extract was developed and sold as a vitamin supplement named folic acid. It entered the market in the 1950s and to this day chemists' remain flooded with folic acid supplements. The enlisted benefits of folic acid are several. Researchers who have studied it say it can prevent heart diseases, decline of mental processes like learning and reasoning and incomplete development of the brain and spinal cord in babies. Yet when tried clinically, the results were not conclusive, making researchers wonder. Now a team from the department of pharmacology, University of South Alabama in the US, has a clue.

The vitamin found in supplements is a synthetic form of the folate found in natural foods like spinach and oranges. When the synthetic form is consumed the body produces the enzyme dihydrofolate reductase (dhfr). The enzyme adds four hydrogen atoms to folic acid after which the body can break it down easily in the liver.

What the researchers found was that the enzyme is not produced in sufficient quantities and its activity varies from individual to individual. Even a rat liver is more efficient in this case. "Overall, humans have fewer dhfr molecules in a given volume of liver than in the same volume of rat liver, and about 60 times lower the ability to convert folic acid to active forms," said Steve Bailey, the lead author of the study published in the September 8 issue of Proceedings of the National Academy of Sciences. Taking supplements goes in vain; they remain unconverted for many hours and are subsequently released with urine.

High levels of folic acid in the body could be harmful. The University of Chile in Santiago reported a significant increase in reported cases of colon cancer when they analyzed data obtained from hospitals on people before (1992-1996) and after (2001-2004) they were given folic acid supplements.

A high dose does not show telltale signs and people have been known to tolerate high doses. Lack of sufficient data has led countries to recommend different levels of consumption of the vitamin. While the US daily prescribed value is 0.4 mg per day for adults, Europe allows 0.2 mg per day. Folvite, the highest selling drug in India, has 1 mg folic acid per tablet.

The European Union and several countries such as New Zealand have put their programmes for grain fortification with folic acid on hold until this vitamin's workings are better understood. "At this point from our own work, we cannot say if the potential detrimental effects, specifically of folic acid, have any fundamental basis or are even valid," said Bailey. The team is now examining the effects of high doses of folic acid on a number of body functions to get an answer to that question.