Instead of quantum of rainfall, we must analyse the distribution of rainfall to understand the changing nature of the monsoon

India was not left out by the global disruptions in weather events. The monsoon ended its June-September annual cycle even though a few weather forecasters said it would continue till mid-October. Down To Earth had earlier reported that this year’s monsoon has left behind contrasting trails of devastation caused by floods and drought-like spells. This is the third consecutive year when the monsoon has behaved in a similar way: extreme rain events pushing up the cumulative rainfall tally, while leaving behind a significant portion of the country with deficit rainfall.

A case in point is Chandigarh. The city’s rain deficit reduced from 24 per cent to 8 per cent in a single day. On August 21, it received 15 per cent of its annual average rainfall in just 12 hours. For the sake of record, the India Meteorological Department (IMD) released its weekly bulletin on progress of the monsoon on September 21, the last of the season. It says the country has received 5 per cent less than the normal rainfall. As IMD defines a normal monsoon year as up to 19 per cent deficit rainfall, India is on its way to a normal monsoon year. But as one tracks the progress across four months, it brings out a scary scenario.

This year, many cities were devastated by torrents of sudden record-breaking rainfall. On September 19, Mumbai experienced 304 mm of rainfall, the highest-ever recorded in September in the last 10 years. On August 29, the city had recorded 331.4 mm of rain—the highest 24-hour rain in August in the last two decades.

While Bengaluru was brought to its knees on August 15, when it received its highest single-day rainfall in the last 127 years, residents in Chandigarh struggled to keep their heads above water with the city experiencing 120.8 mm of rain on July 28— the highest single-day rainfall in 10 years in the month of July. The only hill station in the dry state of Rajasthan, Mount Abu, received a record 770 mm of rain in 24 hours on July 23, when its annual average is 1,600 mm.

It is not just the cities which bore the brunt of the floods. One-third of the country’s total districts—265—were devastated, 2,000 people killed and over 4.6 million hectares of farmland were affected, according to the Flood Situation Report of the Union Ministry of Home Affairs.

And then there was unprecedented rainfall deficiency. As per IMD, about 37 per cent districts received deficient rainfall till September 21. Drought-like conditions loom over 235 districts, according to the National Agriculture and Drought Assessment System.

However, the Union Agriculture Ministry has downplayed the situation saying there is deficit rainfall in only 95 districts. Despite food bowl states such as Punjab, Haryana and Madhya Pradesh recording rainfall deficit of 19 per cent, 30 per cent and 21 per cent respectively, the government claims that “the yield is expected to be same as of last year”.

Latest government data further confirms this oscillation between floods and droughts. Though the National Disaster Management Authority says that 12 states experienced floods, IMD data shows that only two states, Gujarat and Rajasthan, experienced excess rainfall. The rains battered these states for short durations and caused floods, but overall, these states received less than average rain. The rest of the states show a deficit or a neutral trend. The anomalies are striking. The most flooded districts in the eastern Uttar Pradesh are also rain-deficient. For example, Kushinagar district, which faced heavy flooding, still has a deficit of 63 per cent. It is time authorities recalibrate the mapping of the monsoon. 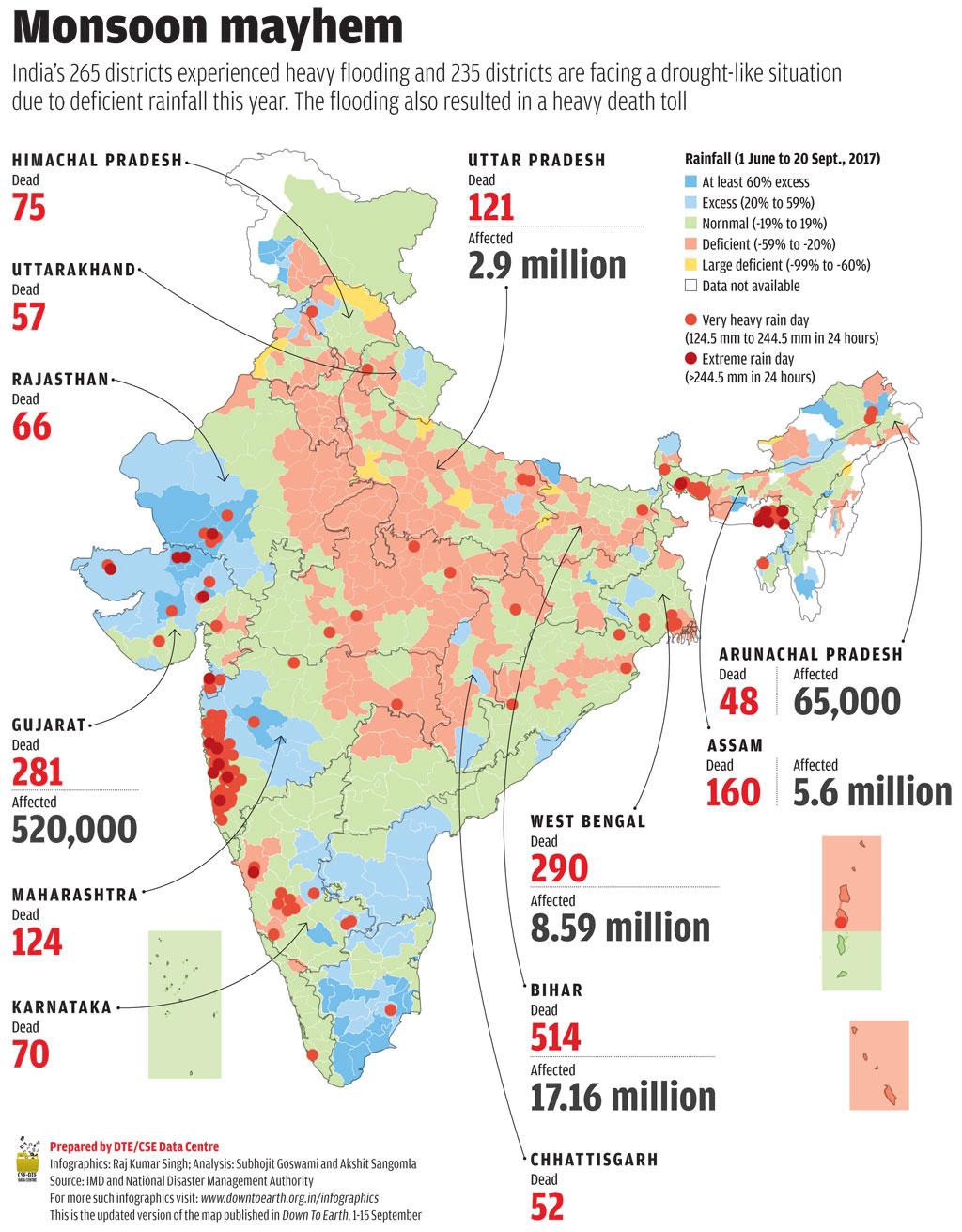