After the polio eradication programme, the Union health ministry is now pushing for eradicating measles, which is essential for meeting the United Nations' Millennium Development Goals (MDGs).

Measles, an infectious disease caused by a virus, is responsible for four per cent of the deaths of children under five in India. Each year, between 60,000 and 100,000 children die of measles in India, which is the highest for any country in the world. According to the United Nations Children's Fund (UNICEF), a country needs 90 per cent measles vaccination coverage at the national level and 80 per cent in every district to meet the millennium human development goals. 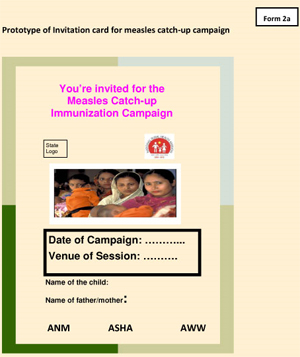 But measles vaccine coverage in India, under the routine immunisation programme, was only 69 per cent in 2007-2008, according to the district-level household and facility survey of the health ministry, and 14 states had less than 80 per cent coverage. The nation-wide coverage rose to 74 per cent in 2009, according to UNICEF.

The disease can be easily prevented through vaccines, but despite the vaccine being included in the government’s universal immunisation programme (UIP) since 1985, the country has not been able to eradicate measles. This is mainly because of low immunisation coverage in some states. To bridge this immunisation gap, the ministry drew an ambitious plan: the catch-up measles campaign, which started in 2010 to ensure that over 90 per cent children, between the age of nine months and ten years, are administered measles vaccine. As per government data, 90 per cent of measles occurs in children less than 10 years of age.

However, the surveillance data of the health ministry shows that a year into the campaign, the number of measles epidemic outbreak incidents in the districts where the campaign was held have decreased only marginally.

Similarly, districts Banaskantha, Bhavnagar, Patan, Sabarkantha and Surendranagar in Gujarat saw nine measles outbreak incidents in 2010. After the first phase of the campaign, the numbers were down to six in these districts. But again, in 2011 five outbreak incidents were reported along the borders of the districts covered under the programme. The first phase of immunisation started in the state on March 8, this year.

Health ministry officials say the impact of the campaign will show results later. Pradeep Haldar, deputy commissioner for immunisation in the Union health ministry, offered a reason for the measles outbreak in the regions covered by the immunisation drive, “The outbreak occurred just prior to the campaign.” What's more, the vaccine takes two months to develop antibodies in children. “If the child gets infected with measles before he develops antibodies, the vaccine will not be effective,” he adds.

Ajay Khera, deputy commissioner for immunisation and child health in the ministry says that all children administered measles vaccine do not develop antibodies against the disease. Only 85 per cent of the immunised children will be safe from the measles virus.

Public health experts deny chances of quality of vaccine being poor. The vaccine’s efficacy rate is only 85 per cent because the first dose of measles vaccine is given in India at the age of nine months and at this age infants have antibodies from the mother that makes the vaccine ineffective.

“The antibodies which the infants carry from the mother stay in their bodies for a year. If the vaccine is given when they are nine months old, then these antibodies neutralise the affect of the vaccine,” said Panna Choudhury, president, Indian Academy of Pediatrics.

In many developed countries, measles vaccine is given to children after the first year. If given after one year of birth, the vaccine has efficacy of 95 per cent. But since the measles burden in India is high, infants are given the first dose of vaccine at nine months. “If we wait to immunise children till they turn a year old, we would be putting them at risk,” said Bhupendra Tripathi, national consultant for measles with UNICEF.

He adds that many countries are using measles vaccines that have same composition. “No vaccine is 100 effective,” he says.

The vaccine is manufactured in India by the Serum Institute and each dose of the vaccine costs Rs 10. The anticipated cost of the campaign is Rs 230 crore.

But the districts for the campaign were selected without proper baseline data; the ministry could not provide past record of measles outbreak in the states except for Gujarat and Rajasthan. Khera says there is a surveillance system in place to capture measles outbreak. “Evidence shows that there is a decline in trend in measles cases,” he says.

The states were divided into two categories—states with less than 80 per cent immunisation coverage and states with more than 80 per cent coverage. The campaign is run in each district for three weeks. For one week in schools and for the next two weeks at the community-level.

As per UNICEF’s coverage evaluation survey, in 2009, Gujarat has 78 per cent coverage of measles vaccine and Rajasthan 65.6 per cent.

“Through the campaign, we expect 90 percent coverage of immunisation in the states. If we find the coverage of the campaign to be less than that, then we will re-look into the activity and continue the work till the target is achieved,” says Haldar.