Complete restoration of ecosystems may not be good 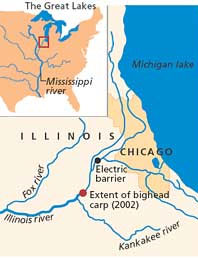 The  greenback cuthroat trout once swam in large numbers through the South Platte and Arkansas Rivers in the US. Diversion of water for irrigation and introduction of non-native trout species such as rainbow and brown trout into the main rivers and brook trout into the small streams led to its rapid disappearance to the extent that the greenback was declared endangered. The species could be revived only by creating artificial barriers around pools where they breed. Conservation projects often attempt to increase connectivity in a bid to restore the waterbody. River restoration, for example, includes boosting maximum flow rates. Ecologists C Rhett Jackson and Catherine M Pringle of the University of Georgia in the US used the example of the greenback to show that reduced hydrological connectivity has ecological benefits. Once an ecosystem has been damaged, restoring it can be quite tricky.

The authors give another example to strengthen their point. Two species of Asian carp, the bighead and silver, were imported by catfish farmers to the Mississippi river basin in the 1970s to cleanse their ponds of algae and organic debris which the fish eat. During floods in the early 1990s, many of the catfish farm ponds overflowed their banks, and the Asian carp entered the local waterways. From there, the fish steadily made its way northwards up the Mississippi river. To prevent it from entering the Great Lakes, the US Environmental Protection Agency is constructing an electric barrier at a cost of US$16 million. But the smaller carp are not responding to the current voltages and escaping. The authorities plan to disconnect the channel completely.

Using such examples, Jackson and Pringle conclude that “a major challenge is to develop a more predictable understanding of how hydrologic connectivity operates in intensively developed landscapes.” The January 2010 issue of BioScience reported the study.

C D Thatte, a water expert from Pune, said there ought to be a difference in water management between water-rich and water-poor countries like India where water is the cause for several conflicts. “Humans are at the centre of our eco-system. Trade-offs have to balance the survival needs of human, animal and plant life.”