Meat of the problem

Antibiotic resistant bacteria in meat on the rise 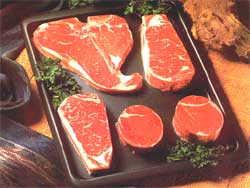 Widespread use of anti-microbial agents in livestock has created a large reservoir of antibiotic-resistant salmonella in the food supply, according to David White from the us Food and Drug Administration's Center for Veterinary Medicine and his colleagues. They have reported that 20 per cent of ground beef, chicken, turkey, and pork purchased from supermarkets in Washington, dc, harboured salmonella (New England Journal of Medicine Vol. 345 No. 16 ). Salmonella is a leading cause of food-borne illness. The emergence of anti-microbial-resistant salmonella is associated with the use of antibiotics in animals raised for food; resistant bacteria can be transmitted to humans through foods, particularly those of animal origin. Of 200 meat samples, 41 contained 13 different types of salmonella. Eighty-four per cent of the detected strains were resistant to at least one antibiotic, and 53 per cent were resistant to at least three antibiotics. Sixteen percent of the isolates were resistant to ceftriaxone, the drug of choice for treating salmonellosis in children. Five strains of bacteria S enterica had resistance to 9 antibiotics, and the two isolated strains of another version of the bacteria was found resistant to as many as 12 antibiotics. Among the versions of salmonella isolated were those that have been associated with outbreaks of food-borne salmonellosis.

In the second study reported in the same journal, 58 per cent of chicken products in four us states of retail chicken meat were found contaminated with bacteria Enterococcus faecium resistant to the chemical quinupristin-dalfopristin. The chemical comes from the use of Virginiamycin, a streptogramin antibiotic, which has been used for decades as a growth promoter in farm animals in the us. L Clifford McDonald from the division of infectious diseases at the University of Louisville, Kentucky, USA, and his colleagues conducted the research. Low-level resistance was identified in three of 334 human stool samples. However, in similar studies conducted in Europe, high-level resistant E faecium have been found in stool samples of people, McDonald notes. "A real difference may be explained by the fact that another streptogramin-based antibiotic, pristinamycin, has been previously available in the Europe and not in the us. "

The third study assessed whether consuming contaminated meat could lead to these antibiotic-resisting bacteria multiplying in the intestines. The study used a unique method to trace the presence of the resistant bacteria back to consumption of contaminated meat. To directly trace the path of bacteria, which live in the intestines is difficult. So, Thomas Lund Sorensen from the Department of Microbiological Research and Development at Statens Serum Institute in Denmark and his colleagues gave a dozen healthy volunteers a single dose in milk (within the regulatory limits for food safety) of either glycopeptide-resistant or streptogramin-resistant strains of E faecium bacteria obtained from raw chicken and pork. After ingestion, the resistant enterococci not only survived but also were found to multiply in the intestinal tract, and were present in the stool for up to two weeks.