Meat, the bone of contention 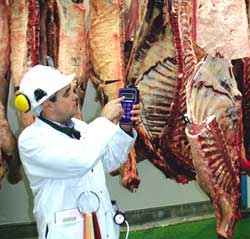 For the first time ever, the World Trade Organization (wto) recently opened its doors to the public for a hearing in a legal dispute. The three parties to the debate on the justification of us and Canada sanctions against eu ban on hormone-treated meat proposed opening the proceedings to the public for the sake of transparency.

The eu argues that the us $126 million sanctions are unjustified, as it has scientific evidence to prove that the ban protects human health. It says while traces of the hormone estradiol are carcinogenic, other five hormones used are also linked to cancer. But the us and Canada said in the hearing on September 12, 2005, that eu hadn't proved the appropriateness of its scientific risk assessment. The us holds that the six hormones boost growth and muscle mass in cattle and help provide leaner and cheaper meat to consumers. Also, three of them occur naturally in humans. A second series of hearings will be held in November 2005 and the final wto ruling is expected by March 2006.