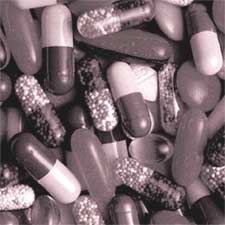 IT IS well known that indiscriminate use of antibiotics or antimicrobial agents generally carries with it major risks. The reason why resistant microbes establish themselves in a population is simple. Every time one tries to eliminate a microbial infection, one is unwillingly carrying out an evolutionary lottery in which the winning numbers are carried by newly arising resistant forms. Because they survive and keep dividing, while the original, sensitive form is either killed or incapacitated, they soon take over the entire population.

The conventional response to the threat of drug resistance is to exercise prudence in the use of the drug. Drug resistance arises via genetic alteration, a mutation. The mutation helps the 'bug' to persist, but like most mutations, it very likely impairs it in some other respect. The impairment may be fatal if the mutant has to live without the drug.

However, if the drug continues to be present, the chances of a second mutation -- one that reduces or eliminates the side-effects (to the micro-organism) of the first impairment -- improve. Once that happens, the patient is in trouble because this new, improved form of micro-organism is not only resistant to the new drug, it can live even after the drug is withdrawn. But what if the drug is withdrawn before a second mutation establishes itself?

Even this may not help, as illustrated by a recent study by Stephanie Schrag and Veronique Perrot of Emory University in Atlanta, us (Nature, Vol 381, No 6578). Schrag and Perrot started their experiment by comparing the wild-type (normal) strain of the intestinal bacterium, Escherichia coli, with two spontaneously-arisen, streptomycin-resistant mutants. By definition, the parental strain was susceptible to streptomycin, whereas, the mutants were resistant. However, in an environment that did not contain streptomycin, both mutants were worse off than the parental strain.

When comparative growth rates were measured, one mutant had a disadvantage of 14 per cent per generation, and the other of 19 per cent. Conceivably, the lowered growth rates were a reflection of reduced rates of protein synthesis.

At the molecular level, both mutations had occurred in a gene known as rpsl. In the first case, a particular dna sequence had changed from aaa, which encodes the amino acid lysine, to aca, which codes for threonine. In the second mutant, aaa had changed to aac (asparagine).

Next, Schrag and Perrot allowed the resistant forms to grow independently for 135 generations in an antibiotic-free medium. Because the mutations were handicapped when streptomycin was missing, it was expected that both sets of cultures would revert to the parental wild-type form, in effect, that everything would come back to square one. But when the cultures were examined after 135 generations (which for a bacterium means about three days), all were found to harbour the same rpsl mutation they had started out with.

However, their chain elongation rates had speeded up considerably and were close to those shown by the wild type. Concomitantly, the cost of resistance had decreased significantly during the 135 generations of evolution. Evidently, in the absence of streptomycin, selection had indeed occurred, but nature had played a trick. The wild-type revertant (which has reverted to the normal phenotype from a mutant state) was not selected. Instead, the original rpsl mutant cultures had picked up mutations in one or more genes that compensated for the handicap imposed by the mutation in rpsl.

Hence, reducing the incidence of antibiotic use may not automatically lead to a decrease in the frequency of resistant strains. The results "are a warning that prudence alone may not be sufficient to stem the tide of antibiotic resistance," say Schrag and Perrot.