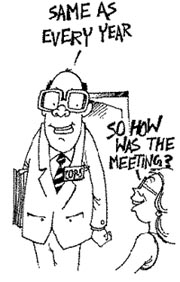 some meetings are convened to arrive at definite conclusions. But there are those that follow a routine merely to carry forward a tradition. The latter seems to be quite true in the case of the Conference of Parties ( c o p ) to the Convention on Biological Diversity ( cbd ). The c o p convened its fifth meeting in Nairobi from May 15-26 and yet again failed to leave any significant impression on the participants.

The cbd , negotiated under the auspices of the United Nations Environmental Programme ( unep ), entered into force on December 29, 1993 and has been ratified by 177 countries. The convention underlines three goals -- conservation of biodiversity, sustainable use, and fair and equitable sharing of benefits arising out of utilisation of genetic resources. In Nairobi, there were more than 1,500 participants representing about 156 countries. The meet was also attended by non-government organisations ( ngo s), indigenous and local community bodies. They had come to address a number of issues related to biodiversity and assess the implications of decisions taken during the meet. Not that the meeting came to very many conclusive decisions.

In what was otherwise a lacklustre affair, the Cartagena protocol on Biosafety remained the only high point. With 65 nations signing the protocol at Nairobi the total number of signatories now stands at 68. The us , which is not yet a signatory to the cbd , once again maintained its distance from the Biosafety Protocol. India, as yet, has also not put its name below the dotted line but "the day is not far away," says Sharad Babu, joint director, department of biotechnology ( dbt ).

India hopes to sign the document during the next meeting at the United Nations ( un ) headquarters in New York in May 2001. The protocol assumes significance as countries move from traditional crops to genetically modified ones and adverse effects on health and environment become a burning issue in international trade on genetically modified organisms ( gmo s). The protocol contributes to ensure an adequate level of protection in the area of safe transfer, handling and use of living modified organisms resulting from modern biotechnology.

However, it has been an increasing issue of contention that pathbreaking or influential decisions have lost their place in the cbd meetings. Organisations round the world had expected that the highly publicised issue of terminator and traitor technologies are going to find a place in the agenda of the c o p -5. But hopes crashed when the terminator failed to qualify for the meeting. Silvia Rebeiro of the Canada-based Rural Advancement Foundation International ( rafi ) says, "Civil society organisations in Nairobi had demanded that c o p -5 take action to ban terminator. With seven new terminator patents in 1999, research on terminator and traitor technologies are in full swing and commercialisation of suicide seeds is the clearly stated goal." If the cbd waits for "the next study on terminator technology scheduled for c o p -6 it will be an inquest not an investigation," she adds.

The c o p -5 participants also studied the Subsidiary Body for Scientific Technical and Technological Advice ( sbstta ), a committee set up by the c o p -1. The sbstta had come to the conclusion that the Genetic Use Restriction Technologies ( gurt s) are not likely to be commercialised in the near future with no field trials having been conducted as yet. A gurt has the potential to affect a variety of other traits and the goal is to turn a plant's genetic traits on or off with the application of an external chemical. rafi accuses the sbstta report to be woefully outdated and dangerously misleading.

In 1999, seven new terminator patents were awarded to the industry and public sector researchers and at least one company, Astra Zeneca, conducted field trials on gurt in the uk . Civil society members are of the opinion that the cbd 's much touted precautionary principle has failed to pass the litmus test by not providing a berth for the terminator in their fifth meet.

The outcome of the meeting regarding the issues of access to genetic resources and benefit sharing, which were perhaps the most contentious issue in c o p -5, cannot be said to be satisfactory. And the fallout again was what a majority of participants had expected -- no real decisions or efforts.

While the high-powered meeting was on at Nairobi, a strong audience had gathered in the neighbourhood to witness the Captain Hooks award ceremony -- an award instituted to highlight "outstanding achievements in biopiracy." Among those who figured in the glory trail of the awards was the us government -- a winner or runner up in several categories. India and the Philippines bagged an award each in the other category -- for their success in defeating predatory patents.