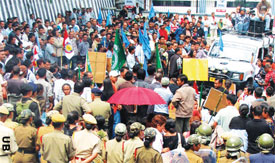 ON AUGUST 24, the Meghalaya government decided to hand over a large parcel of land in West Khasi Hills to the Uranium Corporation of India Limited. Citizens' groups have opposed the decision to lease 422 hectares (ha) of land for uranium mining saying it will affect people's health.

Chief Minister D D Lapang claimed the government took the decision after consulting the local people. "The landowners have allowed us to go ahead with the pre-project development works," said Lapang. "The government is now concentrating on development," said deputy chief minister Bindo Lanong who holds the mining portfolio. UCIL plans to spend Rs 209 crore on healthcare facilities, power plant, drinking water, road development and educational institutions, he said. UCIL had tried to mine uranium in the area in 1990 but had to abandon plans due to violent protests.

Citizens' groups called the development works a bribe. "The Centre should realize that development work will not mitigate the health hazards caused by uranium mining," said Samuel Jyrwa, president of the influential Khasi Students' Union. H S Lyngdoh, president of the Hill State People's Democratic Party, said: "We'll oppose the project as there is no proof showing that radiation effects can be contained." The state government's decision follows the Union environment ministry's clearance to UCIL's proposed mines and processing plant in 2007. Meghalaya has the third richest uranium reserves in the country (13,500 tonnes) after Jharkhand and Andhra Pradesh