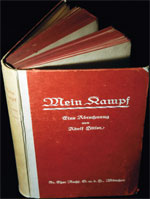 The German state of Bavaria is set to reprint Adolf Hitler’s book Mein Kampf (My Struggle) for the first time since the death of the Nazi dictator in 1945. The state said it would reprint the anti-Semitic memoir before its copyright expires in 2015, to deter other publishers. The new version would include commentaries from historians debunking Hitler’s arguments and warning against the errors he committed. Hitler wrote the book in 1924, nine years before he rose to power, while in prison in Bavaria following a failed coup in Munich. The book set out race theories, claiming the Germans were superior to Aryans, whereas Jews and others were inferior.

“I think we shouldn’t underestimate the potential danger to this day of this book,” Deidre Berger, head of the Berlin office of the American Jewish Committee, told AFP. “The book presented a genocidal theory that was then enacted and continues to be a horrible attraction for many young people.”