Dieting anxiety could reduce memory instead of calories 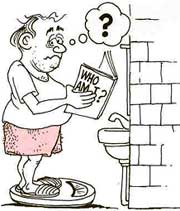 DIET to lose those fat contours and you lose your memory too - warn researchers at the Institute of Food Research in the UK. Rejecting poor nutrition or lack of energy as causes for poor mental performance of dieters, scientists conclude that the cause is actually psychological, says a report in New Scientist, Vol 148, No 1999.

"The effects are similar to anxiety", says Mike Green, the psychologist at the Institute. The loss of mental efficiency is 2 attributed to the constant worrying about diet. "Constant thinking about food means that dieters don't haVe enough mental processing capacity to deal with tasks properly", says Greew. This plays havoc with their memory, besides impairing their power of concentration.

A series of experiments was conducted on about 70 volunteers, to measure their mental performance in areas such as vigilance, speed of reaction, mental processing capacity and memory. Subsequently, researchers found out which of them were dieters. The deficits in mental performance were invariably in dieters, "typically the same as what would be expected in someone who had just drunk two units of alcohol". A second round of tests, in which people eating normally were tested and then put on diets, or dieters were tested and sub- sequently were made to eat normally, confirmed this finding.

Interestingly, mental performance is not impaired in people who eat less for health reasons and not for slimming purposes. This means that only those who are actiyely trying to lose weight put their memory and concentration at stake. Researchers found that dieters with failing diets are the worst hit. They are gripped by panic, and are, as Green puts it, "the most anxious and the most distracted people".

Finally, researchers suggest that people should avoid 'yo-yo' dieting - alternating between ordinary eating and dieting."It really screws up people's metabolism", says Green. So to avoid the onslaught on your memory, just eat sensibly - so goes the message.