Mendha Lekha residents gift all their farms to gram sabha

Village does away with private ownership of land, saying it will lead to a stronger community. 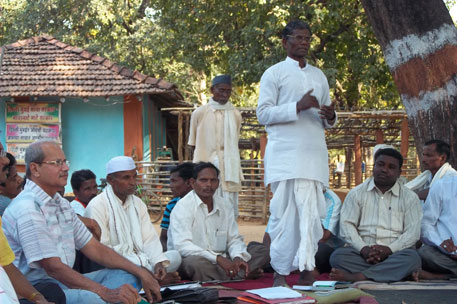 The step was taken at a meeting on September 3, in which the entire gram sabha unanimously passed a resolution to donate their land in the presence of Dhanora tehsildar, Malik Virani. Villagers say that the step was taken with a view to unite the village into a single family and reversing the harmful trend of private ownership of land that ultimately harms both individual farmers and land-dependent communities.

Mendha Lekha has been in news in recent years after becoming one of the two first villages to win community rights over their forests  and wresting rights over bamboo from the forest department.

The Maharashtra Gram Dan Act came into existence in 1964 following the bhoodan movement (voluntary land donation movement started by Vinoba Bhave in 1951) movement that aimed at transferring land from big land owners to the landless. Following this, some 19 villages in Maharashtra state implemented the provisions of the Act by creating gram mandals, a precursor to the current system of gram sabhas. Later, however, the legislation fell into neglect.

Nagpur-based Parag Cholkar, a Sarvodaya activist (follower of Mahatma Gandhi and Bhave) and researcher who has written a history of the gram dan movement in the country, said that under the provisions of the Act, the land-owning farmers in a village are required to donate 75 per cent of their land to the gram sabha, which becomes the legal owner. Mendha Lekha residents have have gone one step further and donated 100 per cent land to the gram sabha.

Five per cent of the total donated land is distributed to the landless in the village for cultivation, while the former owners continue to cultivate the remaining land under hereditary rights. Under the Act, a village’s agricultural land cannot be sold to an outsider. If a farmer wishes, she can transfer the rights of her land to another resident of the village with the permission of the gram sabha. The gram sabha also maintains the land records of the entire village land.

Gram dan is legally valid only when all land-owners and 75 per cent landless people in the village give their consent to the process. Once the village makes its gram dan declaration, the district administration is required to carry out a document check and invite objections. Once this process is completed, administration holds a meeting with the gram sabha to finalise the decision, which is then conveyed to government for gazette registration.

In Mendha Lekha’s case, the village-level formalities were completed in the September 3 meeting. The proceedings of the meeting have been sent to the district collector and the divisional commissioner, and gazette registration is expected to be done in the next three months, informed Dhanora tehsildar.

Devaji Tofa, community leader from Mendha Lekha, told Down To Earth that the traditions of the Gond tribal community to which the villagers belong, do not see land as property or something to be owned by individuals. “It is seen as a community resource.” The modern concept of private ownership has done a lot of damage to communities, said he. “With private ownership, people tend to get selfish and isolated.”

With the decision of gram dan, the entire village has now become a single family, he said. “Earlier the gram sabha was taking decisions on community resources like forests, water and our stone-chip mine, but now agricultural land has also become a community resource, so that we can take all decisions together,” he added.

The greatest benefit of gram dan in present circumstances, says Cholkar, is that it protects village land from being grabbed by outsiders. “In Vidarbha and other areas seeing an agrarian crisis, large areas of land are being bought up by private investors for throwaway prices, leaving farmers landless. But with gram sabha ownership of land, private procurers cannot lure individuals into parting with their land.”

The Act also provides for more autonomy to a gram dan village, because under its provisions, the village is no longer bound by the decisions of the gram panchayat, which is an elected body and tends to get caught in power politics. Also, individual villages under a gat (cluster) gram panchayat may have low or no representation in a body on which they depend for their own decisions. “Once the gram dan comes into effect, the powers of the gram panchayat pass on to the gram sabha,” says Cholkar, “Mendha Lekha has already been practicing this, but now there is a legal sanction to the process.”

Mohan Hirabai Hiralal from the non-profit Vrikshamitra, who has aided Mendha Lekha gram sabha’s functioning for more than four decades, says, “The decision has emerged from years of consultations and thinking within the village community. It comes out of a realization that land is the basic means of production, and community rather than private ownership is more beneficial for both the individual and the community.” He said that though most of the land will continue to be cultivated by the original owners, decisions will now be collectively taken in the gram sabha. “Vinoba Bhave’s gram daan concept has been termed utopian and unrealistic by social observers. But Mendha Lekha’s decision has been taken for firmly practical reasons. There is now an opportunity to observe how such a concept plays out on the ground.”