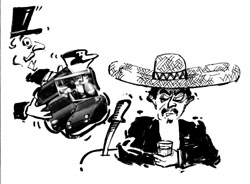 Of late, jazzy terms like 'natural product' (for a traditional herbal drink), 'bio-yoghurts', 'super eco' (for unleaded gasolene) and 'natural supermarkets' have invaded the 'mercosur' trading block (comprising Argentina, Brazil, Paraguay and Uruguay) of Latin America. Ecologically-inclined slogans like "Protect the environment, fix your sidewalk" put up by a cleaning and repair company, adorn urban centres.

From soaps to petrol to paper, a host of industries in the mercosur trading region seem to be switching to green technologies. But environmentalists feel that alongside some genuine efforts are unscrupulous businesses aiming to piggyback ride on a consumer movement simply to boost their sales.

Silvia Ribeiro, head of 'Redes-Amigos de la Tierra' (Friends of the Earth Networks), one of the most active environmental groups in Uruguay, believes that a few instances of greening local companies and transnational corporations do not point to a wider trend. "It is not part of a general or revolutionary change. What exists is a widespread abuse by advertising of the growing ecological awareness."

Environmentalists say that the apparent move towards cleaner production in the region is essentially the result of trade compulsions, not consumer pressure. "There is a great deal of external pressure, especially on exporting companies, which are the ones that have been able to survive, for instance, in Uruguay," says Walter Bonet, member, Environmental Committee of the Chamber of Industries of Uruguay.