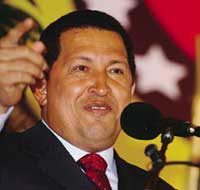 Venezuela will soon be a member of the Southern Common Market (Mercosur), made up of Latin country's like Argentina, Brazil, Paraguay and Uruguay. This move has made some business leaders fear that Chavez's anti-American and anti-free trade rhetoric could jeopardise their trade talks with the us and Europe. Fears were also rife that the left-winger could cause more discord than unity. Chavez has himself said the importance of Mercosur was as much political as economic.

On the other hand, Venezuela's entry is also tempting to the highly indebted economies because of its generous offer to supply scarce oil and natural gas. The deal will in turn also help Venezuela attain food sovereignty.

One of the first areas of co-operation could be a gas pipeline connecting South America from Argentina to Venezuela. But before Venezuela officially becomes the fifth member of Mercosur, it will have to accept the bloc's statutes, rules and regulations, fulfill a series of tariff requirements and ratify Mercosur's agreements.