With health consciousness showing an upward trend, disposable non-mercury thermometers are catching on 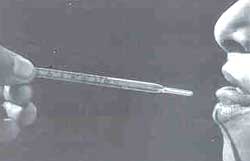 MERCURY thermometers will become a thing of the past in hospitals within the next few years if trends favouring alternative devices continue. National Health Services (NHS) Supplies, the special health authority in the UK which provides goods and services for the NHS, says, the number of mercury thermometers which were in use in hospitals, have almost halved during the past five years.

In 1990, 1.5 million thermo-meters were used in the UK. But this year the total is 800,000. High street chemists also report a demand for nonmercury thermometers, especially from parents buying instruments for their children, although the UK's biggest chain, Boots, is not phasing out mercury-based ones. If this trend continues, mercury thermometers could vanish from hospital wards within the next five or six years, marking the end of a 280-year era. The first successful mercury thermometer was created in 1714 by Gabriel Fahrenheit which eventually became commonplace in hospitals.

One leading campaigner against the use of these mercury thermometers, B Blomenthal, of the Royal Oldham Hospital near Manchester, has argued that there are high risks of breakage and poisoning of mercury thermometers which leads to the spreading of infection among patients because they are re-usable.

"Everybody has become very conscious about mercury floating about, especially in neo-natal depftments," he said. "People feel that if we could use an alternative that was as accurate, why not switch?"

Among the alternatives is the Tempadot, a plastic strip thermometer containing organic chemicals in various quantities which release a blue dye when they reach their different melting points, thus indicating a patient's body temperature. Manufacturers of the Tempadot say it is just as accurate as its mercury predecessor - to within 0. Vc. But, it is yet to be officially tested.

However, a recent study in Nursing Times found that disposable thermometers are more accurate, cheaper and quicker than mercury devices.