Kellogg to withdraw them 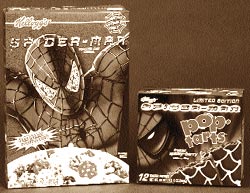 faced with fervent censure in the us, Kellogg Company has decided to withdraw its Spiderman toys "Spidey Signals" fitted with mercury batteries, which were distributed in its sugared cereal boxes. The toy was a promotion for the movie Spiderman ii. The company also announced its resolve to never use mercury batteries in its future promotions. Kellogg would offer postage-paid envelopes to consumers who wish to send back the toys they have already received.

The decision followed an agreement with New York attorney general Eliot Spitzer. Spitzer said the pact would apply nationwide. As per the agreement, Kellogg would stop selling or distributing mercury-powered promotions by September 30. But the catch is, by then the campaign would have served its purpose.

Mercury-powered toys are dangerous as the metal is highly toxic. Kellogg's spokesperson Celeste Clark claimed that though Spidey Signals met federal safety norms and did not impact food quality or safety, the action was being taken to "go beyond what is required by law to address an issue important to our consumers and the environment".

Earlier, the company had to stop shipments to Connecticut and New Hampshire and recall cereal boxes from retailers as mercury-powered toys are banned in these states. But this couldn't be done for New York, as it didn't have any such law. Environmental organisations have called for a federal law banning mercury batteries in toys and other items sold for children.