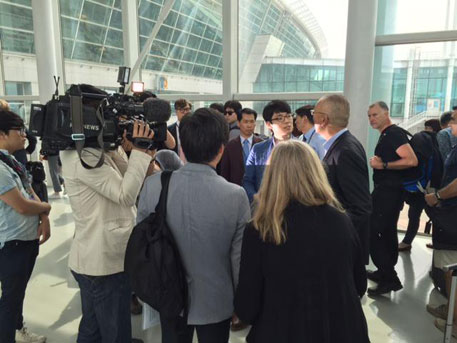 The Middle East Respiratory Syndrome Coronavirus (MERS-CoV) outbreak in South Korea is worsening by the day. The outbreak is the biggest since MERS was first found in the Middle East.

On Tuesday, a 68-year-old woman became the seventh victim of the virus in South Korea, since the outbreak began on May 20, 2015. According to state news agency Yonhap, the latest victim suffered from chronic heart ailments before contracting the virus. All but one of South Korea’s victims have been reported to have acquired existing health conditions and most of them were over the age of 70.

The mortality rate attributed to MERS is about 40 per cent. However, it has been observed that accounting for unreported cases where people have the virus but have not been diagnosed yet would bring down the mortality rate significantly. Eight new cases have been identified so far on Tuesday, bringing the tally of infected persons to 95. On Monday, 23 new cases of infection were announced.

The coronavirus is believed to spread through respiratory secretions of infected persons although exact mechanisms of transmission are not yet well understood. Recently, the ministry of health in South Korea reported detection of the two cases that represented third-generation transmissions (the index case transmits the disease to someone who then transmits it to a third person and the third person has no direct contact with the index case). About 3,000 people have reportedly been quarantined until now and over 1,800 schools have remained shut to stop the spread of the disease.

The virus first emerged in Saudi Arabia in April 2012 and has since been detected in 25 other countries across Middle East, Africa, Europe, Asia and North America. According to World Health Organization (WHO), as of 3 June, 2015, there have been 1,179 laboratory-confirmed human cases of MERS-CoV. The “newly emerging disease that remains poorly understood” has caused at least 442 deaths since 2012. The latest outbreak in South Korea is the biggest outbreak outside Saudi Arabia and has prompted several governments to issue travel advisories and increase precautionary measures against possible outbreaks.

According to WHO scientist Peter Ben Embarek, hospitals have been the primary centres of exposure. He further added that Korea has not seen sustained transmission yet and as there is a single strain of transmission, it can still be followed, traced and stopped. Presently, about 3,000 contact cases of the virus are being followed, most of them in self-isolation for a quarantine.