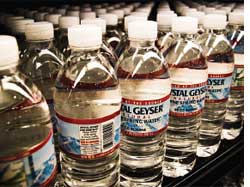 the California Senate has passed a bill making it mandatory for companies bottling, vending or distributing water to declare their source of water, the location of the source and whether that source is privately or publicly owned. The bill, passed on August 22, aims to protect the public's right to know how its water is being allocated.

Operators of commercial water-purification machines will also be required to disclose the information on the machines. Companies operating the water-bottling plants will have to make sources as well as contents available to the Department of Public Health (dph), which will release this information.

At present, licensed bottlers in California do not have to report the volumes they extract for sale. The bottled water industry claims it accounts for less than 0.02 per cent of the us's total groundwater withdrawals. Yet, the impact of groundwater extraction depends on site-specific characteristics of the groundwater aquifer. Continued depletion of groundwater can cause some aquifers to collapse permanently.

By 2006, dph had licensed 181 bottling plants to sell water in California. "Now more than ever, during this drought season, communities need reliable and accurate information about the water being extracted from local aquifers," said Felipe Fuentes, Assembly member and author of the Bill.